The 2012 U.S. Olympic Marathon Trials are just an hour away, with the men set to start at 9 a.m. ET, and the women's race to begin about 15 minutes later (it's the first time the both trials have been in the same city on the same day).

The race is a loop course, planned with London in mind -- the marathon at the 2012 Summer Games will start on The Mall with a 2.2-mile circuit of St. James' Park followed by three eight-mile loops past some of London's most iconic scenery, including St Paul's Cathedral, Tower Hill and the Houses of Parliament, before finishing back in The Mall.

Similarly, Saturday in Houston, athletes will complete a 2.2-mile inner loop through downtown and then run the outer eight-mile loop three times. (After the jump, we have a map of the Houston course.) 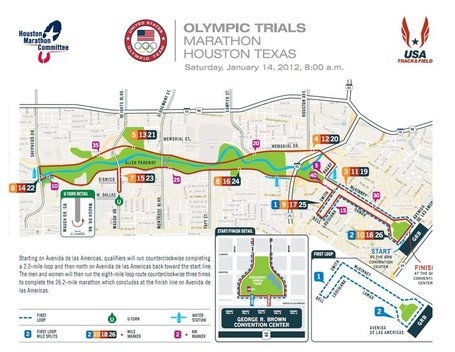 So, now the big question for all you race fans: Where can you watch Saturday's Olympic trials? In short, you can't.

Well, not live, anyways. NBC, which has the rights to the marathon, is showing a two-hour version ... on tape-delay (of course), from 3-5 p.m. ET. And since NBC apparently also owns the Internet rights, there will be no live-streaming.

But there are still other ways to follow along live:

If you come across other good follows for race morning, leave them here in the comments!