Getting To The Starting Line

Share All sharing options for: Getting To The Starting Line 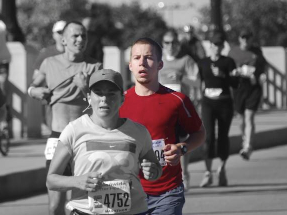 7:15 AM, Oct. 21, 2007: I'm asleep on an air mattress in Columbus, Ohio – or at least I had been. A loud noise echoes through the room I'm in, bouncing off the hardwood floor. I immediately sat up like a shot. My phone was ringing; it was my wife calling.

"Where the hell are you? I've been waiting outside for 15 minutes."

I hang up, grab my gear (shirt, socks, shoes, shorts, and Bodyglide) and run into my buddy Don's bathroom. As many times as I'd gone through the routine before – put my contacts in, strip naked, apply Bodyglide to anywhere that might rub (my sides, chest, thighs, and feet) and get dressed in a technical tee, shorts, socks, running shoes, and watch – I'd never done it this quickly. Immediately after leaving the bathroom, I was positive that I'd done something incorrectly. I didn't have time to figure out what exactly that something was.

The next four minutes were a whirlwind of chugging Gatorade, grabbing a bagel, finding my rental's keys, and getting on the road as quickly as possible. As I sped down Livingston Ave to pick my wife up, I stared at the bagel as I felt a giant pit in my stomach that was growing by the second.

I only had one thought running through my head: "I really fucked this one up."

I found my wife waiting for me outside a friends' house. She got in and we headed towards the city center. I got out of the car five blocks from the starting line, gave her a kiss, and sprinted in the general direction of the starting line.

I got there 10 chilly minutes before the start of the race, my stomach still not convinced that those two bites of bagel were a good idea. As I made my way back towards the 4:00 pace group, the race announcer chirped random cliches at the crowd. She said nothing of value to ten thousand strangers, all of whom seemed to soak it up. The PA system blared Eye of the Tiger. The excited, cheerful strangers around me responded positively, bobbing their heads and side-stepping to the beat. I was in another world – one where people threw their hands up and cheered, slapped each other on the back, and looked ahead brave and confident.

In the midst of all of the noise, in between thousands of fit (and legitimately crazy) people, I stood scared shitless (this would change around mile 8 at a porta-john) – completely unsure of what the next four (hopefully less than four) hours would bring. Two questions came to mind: Who the hell are these people and what in the hell am I doing here? The gun went off, the crowd inched forward, and I walked towards the starting line, one nervous red dot in a crowd of people closer-packed than an 8 a.m. Metro train.

I was about to start my first marathon, and I hadn't eaten any goddamned breakfast.

I finished the race that day (3:46, well under my B-goal of 4 hours), and like thousands of others every year I became a marathoner. In the time since that race I've effectively stopped running for almost an entire year, run two more marathons in a six-month period, two half marathons in six months after that, stopped for six months, run another marathon, and stop running once more (got that? It's ok if you don't – at some point, there will be a graph).

Now, I've started my training back up again with the hopes of running my first ultramarathon sometime in 2012. Along the way, I hope that I can share my experiences with running – fear, hope, joy, frustration, obsession, and everything in between. I'm excited to write alongside the others here and to interact with everyone who hangs out here along the way. I hope to learn from others and maybe pass along something useful from my (limited) knowledge bank.

Although I don't know where we'll end up, it's nice to be here with the rest of you at the starting line. I'm not as scared as I was the first time I set out with a crowd, but I'm definitely as excited.