Share All sharing options for: The Perils of Overtraining and the Joys of Being a Kings Fan 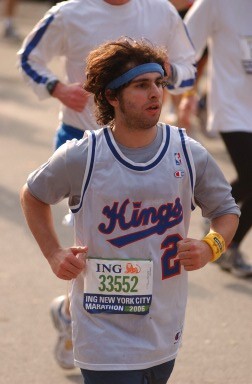 As I crossed the 20-mile marker, I started to doubt whether I could finish the 2006 New York City Marathon. My quads were on fire, and my shins were excruciatingly stiff and sore. I slowed down and gingerly walked to the side, wincing in pain and groaning in disgust, as runner after runner zoomed by me.

A few weeks prior, I was walking around on crutches on the advice of my doctor, who discovered multiple stress fractures in both of my tibias. Despite being advised to rest for at least a month until my injuries healed, I couldn’t convince myself to sit out the race after vigorously training for over a half a year. But now, 20 miles in, I thought about how no one would blame me if I decided to stop.

I never enjoyed running until my junior year of high school, when after getting cut from the football team, I decided to try my hand at cross country. I went on to join the winter and spring track teams, and capped off my high school running career by earning a third-place medal in the regional cross country championship as a senior.

Since then, I became an avid runner, waking up at 7 a.m. at least four times per week to get in a few miles on the treadmill before starting my day, and then oftentimes going for an afternoon jog after I was done with my classes. Once I found out that I was selected to run the NYC Marathon via the lottery process, I increased my routine to an extreme degree.

From May through October 2006, I woke up at 5 a.m., walked 20 minutes to the gym near my office, ran at least six miles on the treadmill, and then went for another evening run every single day. I totaled at least 12 miles, and some days as many as 20, and also I signed up with a personal trainer to work on my upper body strength three times per week.

In hindsight, it was a ridiculous pace that I can’t believe I ever put myself though, but at the time, I actually enjoyed it and never thought twice about any consequences. But sure enough, I began to feel an increasingly sharp pain in my legs in October, and eventually had to see a doctor when it grew severe enough to prevent me from running for more than a few minutes. The x-rays and MRI tests showed the dreaded stress fractures, and both my doctor and trainer told me to stop exercising entirely for several months.

I walked around on crutches for a couple of weeks and ate an ungodly amount of junk food after consuming little but grilled chicken and vegetables for five months. As time passed, my legs started to feel better, and while I wasn’t able to run pain-free yet, I went back to the gym and worked on the stationary bike and elliptical. I could’ve received an automatic bid for the next year's marathon had I not ran, but after putting in so much work, I decided that I was going to at least give it a try. I felt that I could do it, and I wanted to prove it to myself.

On the morning of the marathon, I put on my Mitch Richmond Sacramento Kings throwback jersey, since several people told me that attendants in the stands will cheer for the names on runners’ shirts. I took the shuttle to the course staring point in Staten Island, and had several hours before the race started to wait around anxiously and eat the provided bagels and apples. The only thought I had in my head, was that I wanted to go the distance (cue the Rocky soundtrack), regardless of whether it would take me three or 10 hours.

I made my way to the six-hour pace group, figuring to play it safe, and was surrounded by elderly men who were bragging about running their 20th marathons. A part of me felt that if they could finish that many races, then I sure as hell could run one, but another part of me was clouded with doubt about the strength of my legs and the fact that I barely ran over the last month.

Once the gun went off, it took another 10 minutes to get to the official starting point, and after that, the majority of the race is a blur. I only remember bits and pieces of the five boroughs, zigzagging my way past dozens of runners with ease in the early going, and pumping my first each time I heard a "Go Kings!" cheer from the crowd. Once the adrenaline kicked in, I forgot all about my concerns and enjoyed the experience — until I reached that 20th mile and felt like I didn’t have anything left in the tank.

As I walked in pain and contemplated dropping out, a man jogged next me, and sensing that I was close to giving up, whispered, "Come on, Richmond. You can do it."

It might sound silly when I say that my Kings jersey helped me finish the marathon, but, well, it did. Hundreds of spectators cheered me on, but after hearing that man’s words of encouragement – Richmond was my nickname in high school due to my affinity for the Kings star – there was no way I was quitting. I crossed the finish line at 4:05 – my official time was later adjusted to 3:55 – despite the fact that it took me over 40 minutes to jog/walk the final 5K. It remains one of the proudest moments of my life.

My boss gave me a paid day off on Monday, and several coworkers who’d run marathons in the past, gave me tips, such as, sit in a tub of ice (tried it and lasted about 30 seconds) and eat a high-carb meal (no problems with that one). My dad, a die-hard New York Rangers fan, called me to excitedly say that I’d beaten the times of two of his favorite players, Mike Richter and Adam Graves, who also ran the race.

In the coming months, I took some much-needed time off and attended physical therapy sessions, including underwater running classes, to get my legs back to full strength. I ran a few Road Runner races and trained a little more sensibly in preparation for the 2007 Marathon. Unfortunately, a few weeks before that year’s race, I banged my foot on my living room couch and broke two toes, which prevented me from extensive running.

I’ve since competed in a few 5Ks and 10Ks, with the intention of eventually getting back into marathon shape. I’ve learned a few valuable lessons along the way, both good and bad, and my medal is proudly displayed in my apartment, serving as a reminder of what I'm capable of doing in the face of obstacles.

Each time I open my closet, I see three different Richmond jerseys I hope to wear in future Marathons.