Interview with J.R. Martinez, on the NYC Marathon, training, and motivation

Before the New York City Marathon was canceled, we had the chance to talk with J.R. Martinez, an Iraq war veteran, motivational speaker and "Dancing with the Stars" champion. J.R. was set to run the race with TIMEX in an effort to raise money for NYRR Youth Programs.

Share All sharing options for: Interview with J.R. Martinez, on the NYC Marathon, training, and motivation

J.R. Martinez is an actor, having starred on All My Children, a Dancing With the Stars champion, winning the competition in 2011, and perhaps most importantly, a motivational speaker. Martinez, an Army Veteran, was serving in Iraq in 2003 when an IED rocked his Humvee, leaving him with burns to over 34 percent of his body.

Martinez chose to use the experience to help motivate others with his story or survival. He has spent the past nine years as a motivational speaker, and more recently, released his book, Full of Heart. My Story of Survival, Strength, and Spirit (you can read an excerpt here).

Partnering with TIMEX, Martinez was set to run the New York City Marathon, with a catch -- he would start last, and for every runner passed, one dollar would be donated to New York Road Runners' Youth Programs. On Friday (before the announcement came that that NYC Marathon had been canceled), we had to chance to speak with J.R., thanks to TIMEX Sports.

How has Sandy impacted your training in these final few days before the marathon?

I really haven't been able to go out and run when I've wanted to, just because ... it's a madhouse out there [in New York City]. But this week has been a lot of promotion for my book as well, "Full Of Heart," so I've been focused on that.

On the controversy surrounding the marathon ...

Wednesday is when I got back out, and was bouncing back into the groove of things ... and you see all these runners all over the place. People are ready, man. I know there's a lot of controversy about it happening -- the resources that are going to be pulled to put it on -- and I understand people's concerns, especially, as people have said, you've got people in Long Island, the Rockaways, or Jersey, or Staten Island that are without power, people that, as they say, are in waist-high water ... I understand all that. And it's unfortunate. But I think this marathon, I think it's a good thing for the city, and the people in the city.

And I think it's a great thing because -- me, personally, I say it's a good thing -- because, one, it brings in a lot of revenue. It just does. And then two, I just think it's a great opportunity for people in New York to just see something else; do something different versus what they've been hearing on the news the last few days -- all the news, all the aftermath, all the disappointment, all the sad stories. And I know those need to be told, I just think that people in New York might be ready for a change of pace, and something completely different.

I just think it can be a good thing for the people of New York. And I hope every single one of them pulls some kind of motivation, from me running or other people running, and kind of be inspired. And understand that life is a marathon. Just one mile at a time. What my job is, is to try to give some hope to people from what I do. And then the job for all the other runners is to run it for a cause. So I think it's going to be inspirational, and a nice motivation to people. 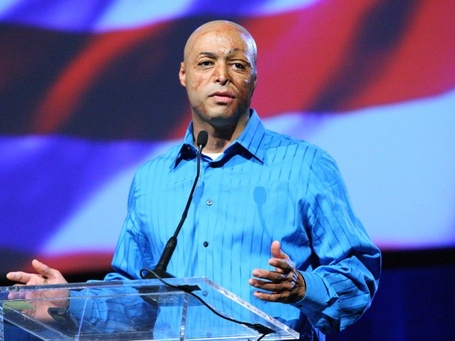 On his partnership with TIMEX Sports ...

Timex reached out to me, and they said, "Hey, we'd really like to be the spokesman for the NYC Marathon." And they explained, "You'll be the last person to start the race, and every person that you pass, we're going to donate a dollar to the New York Road Runners' Youth Programs." And they told me what the programs do, and I said, "That's really cool, I dig that."

It's cool that kids can learn a little bit about running, learn about having a healthy lifestyle -- I dig that. Once we worked through the logistics, it was golden. I signed up for it for those two reasons: I thought it would be a great challenge, and a cool opportunity to raise money, and three, represent the people. Hey man, nine-and-a-half years ago, I was in a hospital, no one thought I was running a marathon, I was barely learning how to walk.

What have been the biggest challenges during training?

Reason why it's been difficult for me is because I travel a lot. Every day, I'm in a brand new city. And of course, traveling is not as fun as it used to be. After five hours, seven hours, eight hours on a plane, the last thing you want to do is get to your hotel, where you have to speak first thing the following morning, and go run for two-and-a-half hours.

But you just gotta do it. I've lost a little more sleep because of it. But I understand the goal, and why I'm doing it, and I haven't allowed myself to half-ass it at any point.

The biggest difficulty I've had to overcome is, I've never ran this long before, this far. The furthest I've run is 15.5. But even like, 10 miles, It's been a long time since I was anywhere near that. I don't think I really even did that in the military to be honest with you. I think the most I did was seven miles. And then my right ankle, I had surgery on it when I was in high school -- replaced all tendons, all ligaments -- and once I get into the high mileage, I start to feel pain in the ankle area. And a couple times it's swollen up, so I've had to stop and ice it, and rest it. That's probably the biggest thing I've had to overcome.

And I have shin splints from my left leg ... those are challenges ... but for me, pain is nothing for me. Pain is something that I've been through in my life. And I got through it. And gonna get through this, one way or another.

When that leg pain starts, and when you want to stop, what do you tell yourself to keep going?

I think of people in my life. There's this one guy, who I've been in touch for four years now. He's a guy that was wounded overseas in Iraq, and he's a young guy, I think he's 24 right now ... he lost a leg, he's burned, over like 60 percent of his body, he's blind, he has a brain injury. His spirit ... you'd never know there was something wrong with him. He has such an amazing spirit.

There are times on my run when my legs are getting heavy, and I want to stop, and I've thought of him. And how's he fought, and everything he's been through to get to where he is today. And the positive attitude he implements every single moment of his life. And I'll think, "OK, ya know what, I gotta keep going."

And I'll think of my own situation ... I mean, they had to teach me how to walk again.

What's helped you prepare for the marathon distance?

I've been habitually, when I go on my runs, visualizing myself crossing the finish line. And trying to visually put myself in the last stretch -- the last five miles, the last two miles, the last 100 meters, whatever -- trying to just just visualize myself there.

And I think that is going to be my biggest obstacle on race day, honestly, is controlling my emotions. Because from what I've heard from everybody, it's so exciting, and it's super fun, and it's easy to get caught up in everything. I'm being trained based on heart rate. My coach wants me at a certain heart rate. And we gotta really work the first five miles of the race to stay in the zone. Because it's very easy to get excited, and all of a sudden you look down at your watch and your freaking heart is at 180.

TIMEX was great. They gave me a trainer, somebody I can talk to all the time, and is going to give me feedback and advice. But the greatest piece of equipment they gave me is the TIMEX GPS Run Trainer. It's a badass watch, man. It really comes in handy for me, where I travel all the time. All I got to do is activate the GPS and just take off and go run. And I'm able to see where I am, and how far I've been running ... I recommend the watch for people that not only are training for a marathon, but maybe just a 5k. It calculates calories, distance, mileage, time, heart rate -- it's an all-around good watch.

What's your goal on Sunday?

"Oh, J.R., I voted for you on 'Dancing With the Stars'!" And I'm like, "Oh, you want a picture?" And then when they stop to take out the camera, I'm just gonna keep running.

Following the announcement the NYC Marathon was canceled, J.R. sent the following tweets.

I was, as were so many others,looking forward to running the ING New York CityMarathon.My thoughts and prayers are with everyone

during this difficult time. The city of New York is full of strong & wonderful ppl. This is a time for all of us to unite & help NYC recover