I'll apologize ahead of time that the embedded videos all require Microsoft Silverlight. Trust me, I hate it more than you do. If you don't have it, I'm sure there's a download link somewhere.

Unfortunately for track fans, NBC has made Silverlight a necessary evil to see any of their replayed events.

Personally, I think it is pretty impressive that Microsoft was able to design something so evil without direct input from Hitler and Satan. 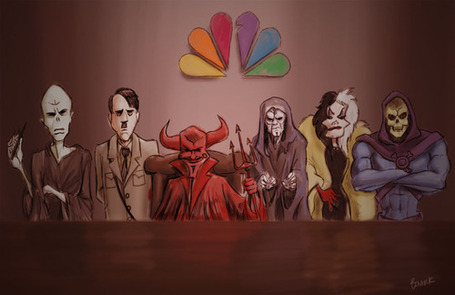 First off, here's a link to the preview for these events if anyone is interested:

Chaunte Lowe pulled off the upset by a whopping .02m (also known as 3/4 of an inch) over probable winner Anna Chicherova. Lowe was coming in hot with an outside chance to upset. Chicerova shit the bed, and Lowe took advantage. Granted, I would've thought the winning jump would be higher, but it wasn't.

What? You don't believe me?

Spirit here heard the news and was so excited, she decided to start training for the London high jump immediately.

My upset pick Patricia Hall was seeded in the same semi-final as the two favorites to advance, Sanya Richards and Aleksandra Fedoriva. She was in position to make me look really good as a track and field prognosticator and she easily beat the two favorites. Wait, that's not what happened? She was basically a non-factor for the two more experienced runners? Ah.

Sanya Richards moved on to the finals and won by a commanding margin.

What? Don't belive me again? That's some attitude you've got there. I bet everyone at your job thinks you're an asshole.

I mentioned in the preview that Sanya has had some trouble closing the deal in championship meets in the past. I don't want to, in any way, detract from Sanya Richards's accomplishment of becoming a world champion in the 400m. No amount of steroids is going to get my fat ass into the finals of a world championship. But, there may be some debate as to how impressive this win really is.

Most of the top athletes are probably using this time of year to start getting in shape so that they can peak later on. Later on being, the 2012 Olympic games. To most of them, it is a no brainer to sit out the indoor season in an Olympic year so that their training doesn't get derailed. This was an indoor championship, but it was an indoor championship in an Olympic year. In other words, there was no Anastasiya Kapachinskaya, there was no Amantle Montsho, Novlene Williams-Mills, or Allyson Felix running against her.

The ladies came through again with another barn barner. It seems like it doesn't matter what year it is, this one is always a must watch. If this race didn't entertain you, then you don't like track and field. So stop wasting your time reading my bullshit.


I'm too lazy to watch that video, just tell me what happened.

This race saw at least 3 different lead changes, with 4 different countries looking like they had a shot to win at various stages of the race. If you didn't watch it yet, here's your last chance before I spoil the ending for you . . . Great Britain ended up pulling off a pretty surprising upset. Interestingly, they had their strongest runner on the 3rd leg, which is traditionally (though not always) the weakest leg. Take that conventional wisdom!

This content was created by a member of the Stride Nation community, and does not necessarily reflect the opinions of Stride Nation's editors or SB Nation/Vox Media.