Everywhere you look, people are huddled in foil blankets. IVs hang from the walls, snaking down into the arms of dangerously dehydrated people. Doctors and nurses in bright red MEDICAL shirts hurry about, checking on patients, doling out rations, and ushering in new arrivals. People stagger toward cots, unsure of their next step, and quite possibly unsure of where they are.

Every few minutes brings with it EMTs carrying a stretcher, on it a person completely unresponsive, more dead then alive.

This is not a scene from a war epic, but rather the scene in the Medical Tent at the finish line of a marathon. Which is where I found myself after Saturday's Rock 'n' Roll USA Half Marathon in Washington, DC.

But wait. Let's all learn how I ended up on a cot trying to (unsuccessfully) keep down Gatorade and a bagel.

The morning began as it usually does with races in DC -- on an overcrowded train running behind schedule. What should have been a 15-minute ride turned into 40 minutes thanks to a train's malfunctioning doors at Smithsonian. This meant my sister and I didn't actually get to our stop until 8 a.m. -- the race start time. And then we were met with this: 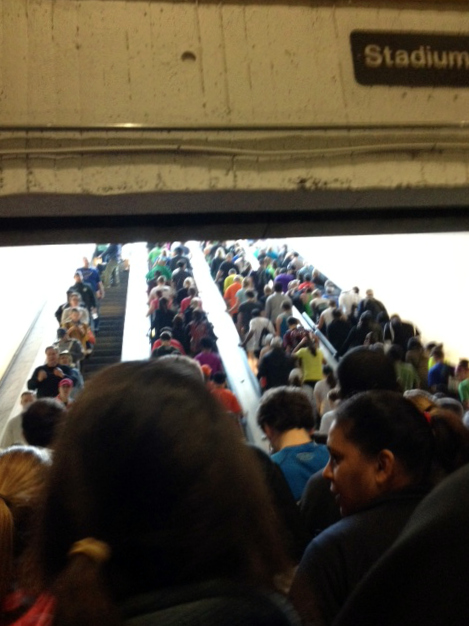 By the time we got up the stairs, paid a visit to the port-a-potty (foreshadowing!), and shuffled our way in the crowd to the start line, it was 8:30. I typically don't mind missing the starting gun, but Saturday's late arrival proved to be particularly annoying -- I was slated to start from corral seven, but ended up hopping in line somewhere around corral 30, which meant a lot of weaving and stopping and starting. And unfortunately that never really let up throughout the (very crowded) race.

Starting at RFK, the course headed west toward the Capitol down C St. (shoutout DC Tri Club), past Union Station, down Constitution before heading up 18th Street. I did the first 5K in 28:57 (9:19 pace, which included an opening mile of 10:28) and was feeling good. And definitely glad I opted for the Larry Bird jersey (it was St. Patrick's Day, after all) -- Saturday ended up being a lot warmer than I was anticipating (more foreshadowing!). 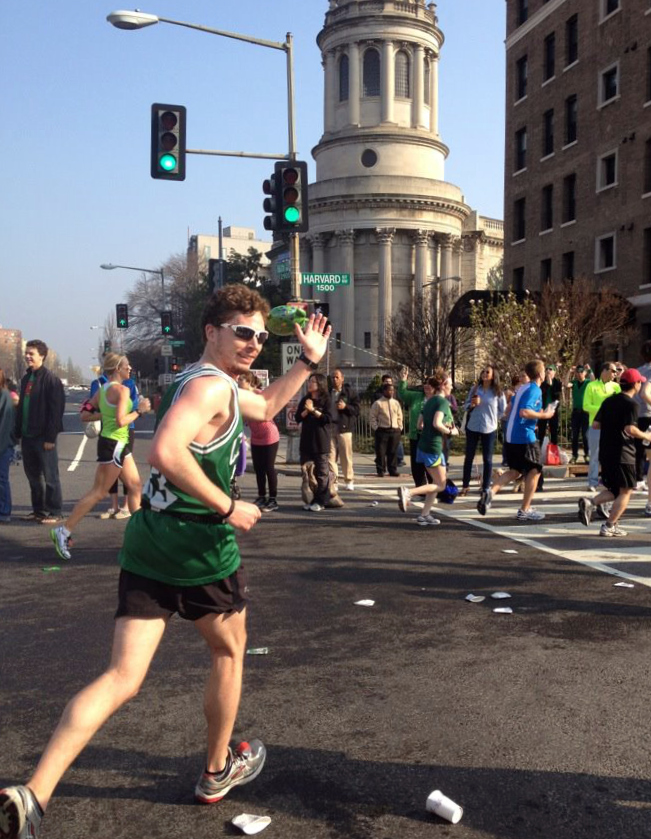 We made our way up through Dupont and then over to Adams Morgan and into Columbia Heights. It was around this point it began to feel like someone was stabbing me in my right leg, just below the calf. Which was great, of course, because I still had about five miles to go.

Down N. Capitol St. I went -- with a couple of stops to stretch out my calf -- which is about when I realized I probably wasn't going to hit my goal time of 1:55. And then I quickly realized that I probably wasn't going to hit my BACK-UP goal time of under two-hours. And that was extremely discouraging. With that realization, the leg pain and the ever worsening "stomach issues" (yep, foreshadowing!), the thought of just calling it a race and walking the last few miles began to creep its way into my head. But I've never just quit on a race, and I didn't want to start now.

So onward I ran, eventually crossing the finish line in 2:01:07, coming frustratingly close to breaking two hours (but it was still a PR, so I can't complain too much). I picked up my finisher's medal and post-race snacks and went to meet my family. I had my chocolate milk (that's MY AFTER) and an apple while my sister and I swapped stories (mainly about the dogs we'd seen along the course). As we began to make our way to the Metro, the feeling hit me. The feeling that my body did not like what it had just gone through.

I opted to stay behind and find a restroom while my family went ahead. "I'll catch up," I told them. Two hours later, they were picking me up from the Medical Tent.

As soon as we parted ways after the race, I was in a port-a-potty, fully expunging everything I had eaten that day. Feeling nauseous and now very lightheaded, I thought it best to not get on a Metro just yet. In the Medical Tent, they had me lie down, took my heart rate and blood pressure (both normal), and fed me Gatorade and a bagel.

That Gatorade and bagel hung out in my stomach for, oh, I dunno, maybe six minutes. I returned to my cot, had some more Gatorade, and then promptly returned to the port-a-potty. (Hey, there's my breakfast!) This went on for a bit until I finally felt stable enough to stand-up and walk (and/or had nothing left inside of my stomach).

I still really don't know what was wrong with me. Either I was severely dehydrated as a result of the unseasonably warm conditions (but I've run in races on days much hotter than Saturday), or I had some kind of a stomach bug (the last thing I mentioned to my sister before we started was that I didn't feel great, but I chalked that up to pre-race jitters). But I've never felt that way before. And hopefully never will again.

Pictures courtesy of @KatieHudson and @joelle18. Shoutout to Haines for the shoutout in Dupont..