Share All sharing options for: NYC Half Recap: Spectator Review Of Manhattan Race

The alarm hits my eardrums like a sledgehammer. It is 7:03 AM and I am immediately awake, turning off the noise and putting my feet on the floor. Coming into New York City on Saturday afternoon, my brother told me one simple fact: if I wanted to go out on St. Patrick's Day, I had to find somewhere else to sleep.

He had been fastidiously preparing for the NYC Half for the last fourteen weeks, and his drunk little brother wasn't going to crash his Brooklyn apartment at 3 AM and ruin his important night of sleep.

Mindful of this gentleman's agreement, one of my coworkers was kind enough to allow me to sleep at his cousin's apartment with him. The best part? It was located just two blocks away from the starting line of the NYC Half.

Getting up quickly, I threw on my bright green "Everything is bigger in Texas" shirt and headed to the elevator. Within minutes, I was strolling down 66th street, staring up at a big CNN animatronic billboard with the temperature and the time - 7:10 AM, 46 degrees. Twenty minutes until race time.

It was an eerie, calm morning in Manhattan, with fog resting softly on the rooftops and shrouding skyscrapers in mystery. Despite the temperature, it felt warm and the humid air kept me from being uncomfortable.

Making my way to the corrals at the starting line, I could sense a lot of feelings coming from the participants -- nerves, excitement, trepidation, eagerness. The pot was boiling over and all the hard months of work were about to come in handy for a huge field of 15,336 entrants. 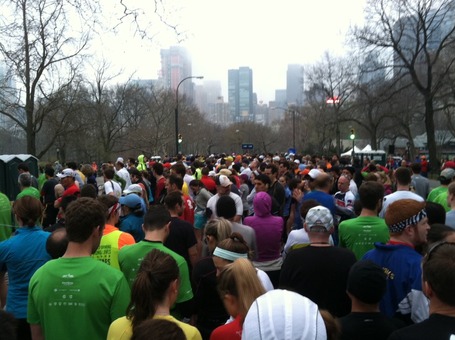 I continued to walk by the corrals, hoping to catch a glimpse of my brother in the vast entrant pool. It wasn't until the race began and he raced by that I finally saw him. 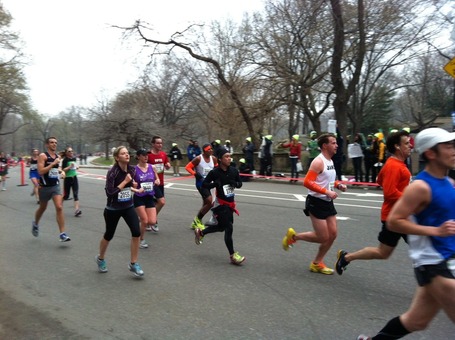 Fortunately for spectators, the course is fairly convenient to navigate. The race began by doing a six mile loop through Central Park, bringing the runners back down the same street and allowing me time to grab some coffee.

One thing I will say about the competitive runners that headlined the race -- they are fast. We're talking crazy fast. Peter Cheruiyot Kirui of Kenya finished the 13.1 race in 59 minutes and 39 seconds, averaging a pace of 4:34 per mile. I don't even think my thoughts race that quickly.

Kirui and a small band of professionals passed the six mile mark 27 minutes after they started the race, passing wheelchair entrants who had a five minute head start. It was truly impressive and a testament to the incredible fitness than can be achieved by our kind.

After watching my brother race by (he completed the 10K in 41 minutes), I headed to the subway, taking the 1 and transferring to the 2 before arriving at Wall Street. By the time I got to the 13 mile marker, the professionals had already long finished, and I was able to take my time and watch race bandits get nearly tackled by security and volunteers who were mandated to keep the finish line clear of freeloaders. That was possibly the most interesting part of the morning.

An hour and twenty five minutes after my brother began the race, he rounded the final corner on Water Street and began his descent to the finish line. His face was full of exasperation and exhaustion and all I could do was yell out support with my hoarse voice.

I began jogging down the street to meet him at the finish line, though participants had to meander at least 3 blocks through another corral to get out of the race and into the thoroughfare at the South Street Seaport.

A lot of entertainment was set up for everyone to enjoy. For example, these ridiculous musicians on stilts: 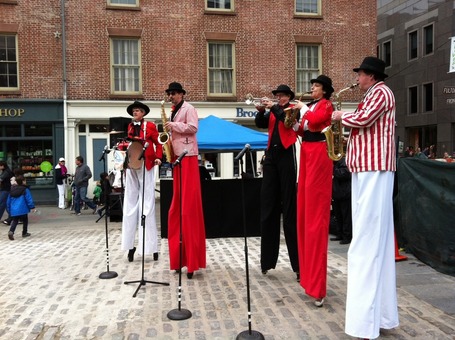 The Seaport was ready for a party, with a full stage and tons of free food and massages for entrants. The air was more chilly on the dock, at 44 degrees with a slight wind coming off the bay. 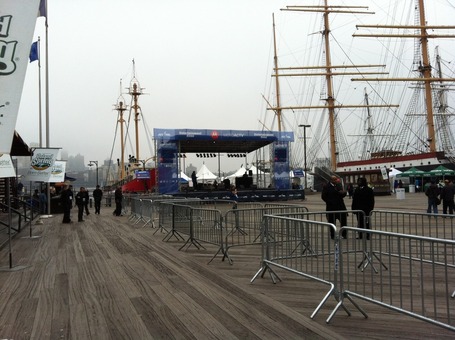 My brother is a member of the Prospect Park Track Club, and they had their banners waving. There was a lot of support amongst this group, and you could tell they were all really proud of each other for what they accomplished on that foggy morning. 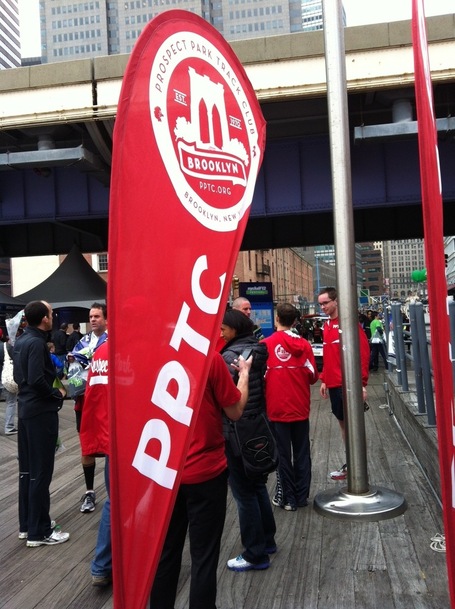 In terms of a spectator experience, the NYC Half was well-executed and easy to deal with. I was able to see a lot of interesting things and it was painless to go from the starting line to the finish line using the subway. I'd highly recommend watching this race if you have a friend or loved one racing in it next year, as you will certainly enjoy yourself - and supporting someone during an event like this gives them a lot of motivation.