Share All sharing options for: Alternatives To Solo Runs: The Red Dress Run

It was a warm day -- warmer than anyone in our group of about 15 expected. This meant sweating; sweat and a tight red dress lead to chafing.

There's a distinct flavor of disorientation that results from walking out of a dark bar into a bright sunny day. Wearing dresses, sweaty and day-drunk, we felt like royalty. We should have eaten lunch beforehand.

"The event starts at noon. That should mean there would be a provided lunch, right?" "Probably." That was our pre-event conversation. We showed up to our first Red Dress Run (our first hash, actually) ready to put down a base of food and start drinking before the 2 p.m. "gun time."

We spent the next few hours drinking Budweiser out of kegs, mingling with the group of 15 that we'd signed up with and the others who seemed much more comfortable in their dresses than we were. We discussed the Red River Shootout with a man in a wheelchair (he'd broken his leg after signing up, but damn it, he wasn't going to miss this day for anything). There were a number of grey-haired folks in the crowd, a lot of 20-somethings and, most memorably, a 7-plus-foot gentleman -- we dubbed him Gheorghe Muresan -- wearing a sequined number so tight around the hips that it showed off all of what he was packing (Gheorghe Mure-dong?).

We were told that this event does not accurately represent the average hash run. "Hashmas," as it's known, attracts all sorts of crazy types. This was probably the most accurate statement of the day.

After two hours of beer and mingling, the Hash Master -- one part Mary Wittenberg, one part tour guide and about 50 parts Dionysus -- gathered the group into a large circle along the waterfront and gave the pertinent details to the uninitiated. We would be running to a beer stop; the course was marked with chalk, but wrong turns may be built-in; a small bit of on-course vocab was described and a few songs were sung.[1]

Then we were off and running; 500 drunks in red dresses spilled through the streets and courtyards of Southwest D.C.

The beer stop was about a mile from the club as the crow flies. We ran about two and a half miles to get there, the added distance due mostly to the inherent trickery of a hash run (and also, to a lesser extent, to wobbly legs). We had no idea where the beer stop would be; the race course is known only by those who lay it out (known as "hares").

Southwest D.C. is a strange mix of high-rise condominiums and half-thought city planning. Most of the route took us through housing in various states of disrepair. We ran through courtyards of garden-style apartment complexes. Jeering catcalls and comments regarding our perceived sexuality were the day's vernacular. At one point we tried to find a way into Nationals Park; in our mental state, it made perfect sense to have a beer stop in a baseball park.

We eventually found our way to the stop: a swinger/S&M club in the middle of an industrial part of town. Upon recognizing the location, a woman next to me screamed, "YEAAAHHH! THE CRUCIBLE!!!" We had no idea what this meant, but her enthusiasm was nice.

We went into the beat-up old building to find pitchers of every beer possible laid out on the bar. We spent the majority of our two hours at The Crucible playing pool. Over that time, the reality that we were in a sex club slowly dawned on us; other types of bars don't tend to have encyclopedic DVD collections or cages hung from the ceiling. Later on, as I was pulling up my dress to take a piss in the toilet behind a pulled curtain, the absurdity of the day started to settle in.[2] I advised my friends that maybe they didn't want to be sitting on the furniture. 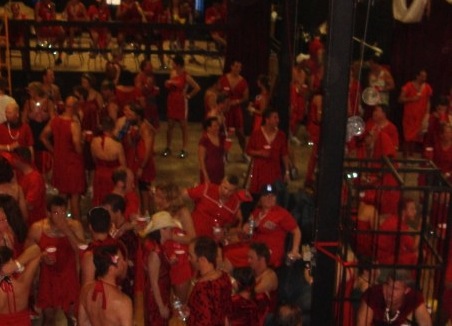 The run back to the first club largely remains a mystery. I vaguely remember running around a few salvage lots near Fort McNair. Eventually, we ended up across the street from the bar, with only a small, barely supported chain-link fence between us and dinner. Without being able to leverage myself over, I did a somersault over the fence, dusted myself off, and jogged to the bar. A few minutes later I was informed that my leg was bleeding; it must have gotten caught on the fence.

Back at the bar, dinner was served. The dance floor was packed; Gheorghe was dancing. At this point, all 500 of us had been drinking for eight hours, minus the 45 minutes of running mixed into the afternoon. I saw three women take turns making out with a man in a leopard-print dress. The Red Dress Run is easily the most hedonistic thing I've ever witnessed.[3]

As the bartenders kicked us out, two girls invited a few of us to a house party hosted by a local hash group in Shaw. It ended up being held in a shell of a house that was either occupied by squatters or going through renovations. I dropped my bag upstairs in the corner of the upstairs room -- there were no walls save the ones that separated the bathroom from the rest of the floor. The floorboards were actually just plywood boards; I could see down through the floor to the level below. The bathroom had two toilets, though one of them was shaped like a bathtub. I have been told the kitchen was covered in a thin film of raw meat. Leaving the house was like stepping away from a weird dream.

There are few things more delightful and terrifying than riding the subway home alone clad in a red dress.

Two days later, I went back to the club along with a friend who had lost his phone and ID during the hash. The Hash Master had a pile of IDs and phones that were left at the bar and was incredibly helpful in getting things back to their owners. We stood on the waterfront and chatted for a few minutes -- he wanted to make sure we had a good time at our first hash, after all -- before heading back home.

As we drove around Southwest D.C. to get back on the freeway, we tried to piece together just where the hell we'd run. We couldn't really pin our route down; our unfamiliarity with the neighborhood combined with our general stupor during the run pretty severely blurs our memories of the day.[4]

I haven't hashed since, but not because I didn't enjoy my first. The day was such a genuinely absurd experience that it feels complete; any attempt in the future to recreate the day will seem hollow.

1) The vocabulary used by Hashers is overtly sexual. There's a good chance that high school kids would find it tacky, but even so it's good for a laugh or two.↩

2) I now assume that stalls in a swingers club are a faux pas. Stalls that don't have holes in them, at least.↩

3) There is a Red Dress Run in New Orleans. This terrifies and intrigues me. ↩

4)We didn't get many pictures that day -- a really good series of Red Dress Run photos from the year prior to our running, in this photo set. There's another set here describing the run the following year. It looks like their experience was quite similar to ours.↩