Trail Review: Mendocino Headlands, Where There's Nothing But Distraction

Share All sharing options for: Trail Review: Mendocino Headlands, Where There's Nothing But Distraction

If there's one time in which distraction is easy to come by in running, it's when running on vacation. Sometimes, that distraction prevents the running; when you're spending six to 12 hours walking around theme parks, museums, national parks or shopping districts, it's easy to sleep through a scheduled run and stay in the hotel bed or cabin cot. But if you can yank yourself out of the bed, you win that holiest of training trophies: new scenery.

We visited Mendocino on the northern California coast earlier this month for a few days. I brought my trail shoes and expected to get in two runs -- a 3-5 mile tempo and a 10-mile easy run. The longer distance would have been better on the first day because I was fresher coming into it. The first morning, however, followed a long night with heavy beer and light sleep. There would be no running that morning. 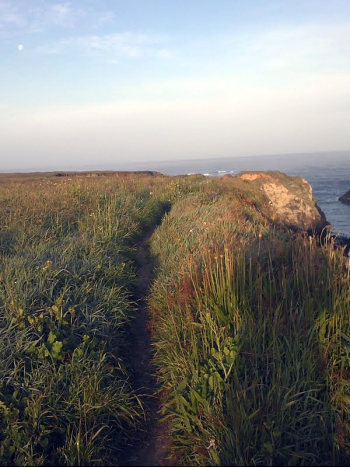 I got out at daybreak, and luckily we stayed just a half-mile or so from the Mendocino Headlands State Park, which has a short trail system along the jutting coastline. There are any number of entrances to the main trail. Heeser Street wrapped around the west and north sides of the village of Mendocino, and once on the trail you're never more than a couple hundred feet (and often only a couple dozen feet) from that road. I entered the trail near a popular bathroom and water facility where divers were suiting up for the morning. Most other hikers and runners I passed seem to have entered from the opposite direction, the core of the town.

It's single track throughout, but hardly technical. You'd have to be drunk or running backwards to ever really feel in danger, even though you're 50 feet or so above the churning oceans or rock outcroppings (depending on the tide). The tide was low when I ran the Headlands, and the rocky beaches and rock formations were exposed. They were fascinating to look at.

And there's another distraction: if you want to stop and take pictures of what you come across, you're not doing a tempo run. When I was moving, I moved at a good clip. But I stopped a lot. I could have skipped the photos and come back later for visual souvenirs, but the combination of the tide, the sunrise and the low foot traffic made it seem more important to capture it all right that second, training be damned. Needless to say, I don't much stop for photos when running at home. Away from home, you get the lovely benefit of new scenery that distracts from the physical exertion. You also get the distraction of unfamiliar environs, wrong turns, dead ends and, in my case, Kodak moments.

Parts of the trail were so well-worn as to feel like a jogging path at a city park. Other sections were a little rocky with natural steps and dips, ruts and bumps. It was dirt throughout ... except for the south section closest to downtown, which was pretty wildly overgrown when I ran it. You'd be fine taking that section in long pants, but a fear of ticks and a decision to wear shorts had me turning around to do a section of road at two points.

You can take the trail up to Little River Beach and along an abandoned timber road, but I pulled off once back in town and ended up the run a little over 5K. I went to Mendocino meaning to run 13-15, and I got in three. Sounds about right. I was able to make it up at home, and I still got to get in my favorite part of running on vacation, the new scenery. I'll take that trade-off any day.