I'll be honest, before, like, a week ago, I don't think I'd ever heard of Galen Rupp. But then he went out and won the men's 10,000m at the U.S. Track and Field Trials. And he didn't just win -- he crushed the field, winning by more than eight seconds.

Then on Thursday night, he won the 5,000m (though in much closer fashion, just nipping Bernard Lagat by just 0.15 seconds), and in the process broke a U.S. Trials record in the event -- a trials record previously held by one Steve Prefontaine. With the win, Rupp became the first man to successfully complete the 5,000m/10,000m double at the U.S. Olympic Trials since Curtis Stone did it 1952.

Rupp will head to London as a legitimate medal-contender in both the 5,000m and 10,000m, which is kinda crazy, considering no American has earned a spot on the podium in either event since 1964. What I'm trying to say is: Galen Rupp might be one of those special, once-in-a-generation runners.

After Galen Rupp's emphatic victory in the 5000 meters, his coach provides the inside scoop on how the race was won.

Here's a neat thing! It's an analysis of Rupp's "pace and stride consistency," as constructed by BYU biomechanist Iain Hunter, Ph.D. (click the link to read more about it): 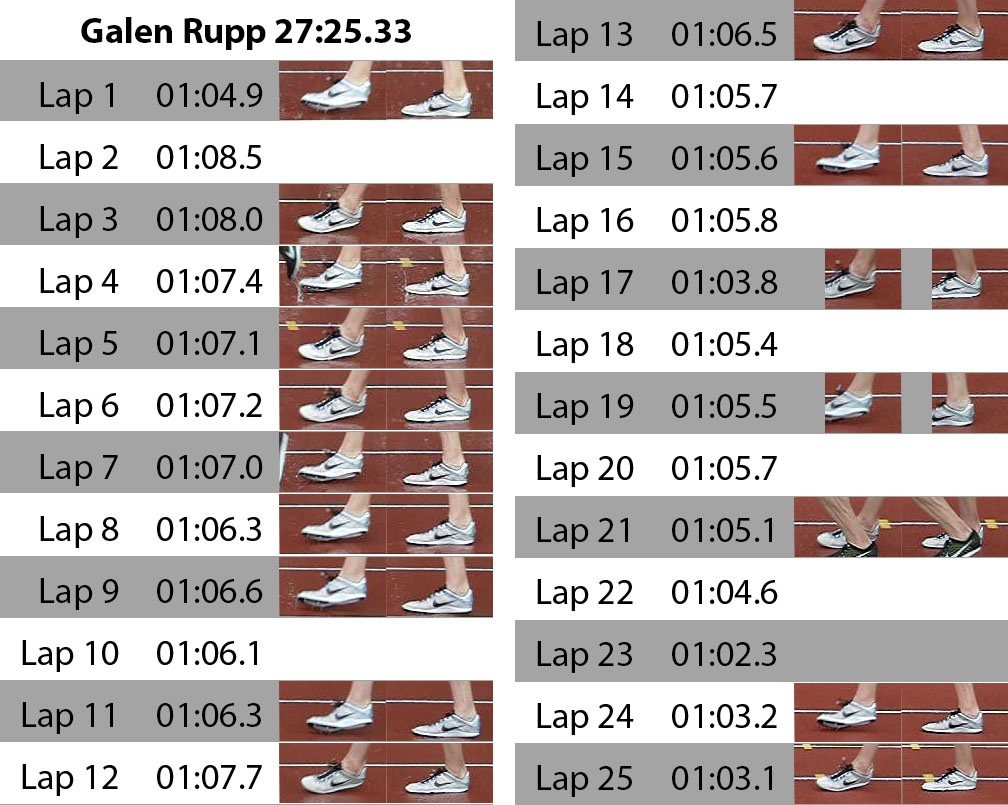 Meanwhile, in Buffalo, there are some shenanigans afoot!

The Rapid Running Buffalo Half-Marathon was scheduled for Saturday ... until organizers "postponed and rescheduled" the race just nine days before it was supposed to start because "too many people registered ... and no way of handling them." But wait! A hero has emerged to takeover and organize a brand new half marathon! Bless you,

On Monday, it was announced that the new event, named "50 Yard Finish," would be run at 7 a.m. Saturday in Orchard Park in response to the postponed Rapid Running half-marathon. The event is put on by the Buffalo Niagara Sports Commission, the Town of Orchard Park and Eclipse Multi-Sport, which Horan runs with his wife. Runners can choose from a half-marathon, a 5K or a One-Mile Kids Fun Run. They will also get to finish at the 50-yard line as the Rapid Running event promised.

The 50 Yard Finish registration fee will be waived for any runner who already registered for the Rapid Running Buffalo Half-Marathon.