Share All sharing options for: The Warmup Lap | 7.11.12 - Roger Banniester Carries The Torch 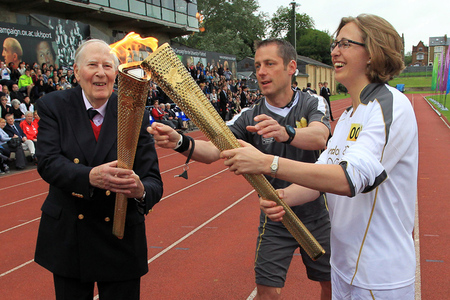 Sir Roger Bannister had his turn carrying the Olympic Flame at the start of day 53 of the Torch Relay. (Photo by LOCOG via Getty Images)

Athletics legend Sir Roger Bannister returned to the site of his greatest sporting achievement as he started Tuesday's journey of the Olympic flame.

The Savages' Olympics: It's a shameful stain on history - pygmies, cannibals and tribesmen forced to compete at 1904 Games in order to prove white supremacy | Mail Online

The shameful spectacle was organised by 1904 games director James Edward Sullivan an Irish New Yorker, who wanted the tribesmen to compete against each other.

For a year, we have followed triathlon world champion Alistair Brownlee as he has written about his build-up to London 2012 exclusively for Metro.

Lastly, Geoffrey Mutai, who ran the fastest Marathon ever last year in Boston, will be returning to the BMW Berlin Marathon on 30 September.