From the Seward City News' Carol Griswold -- via Deadspin -- comes this absolutely terrifying photo of runner Penny Assman, a 34-year-old MEDEVAC helicopter pilot, falling off a cliff during the Mount Marathon Race in Alaska. 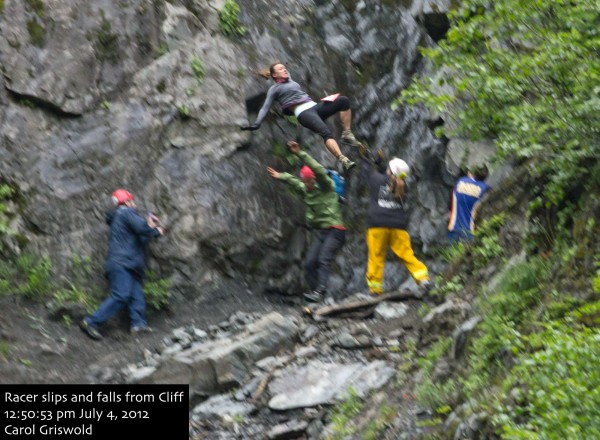 According to her boyfriend, Assman suffered a "Lacerated Liver, Internal Bleeding, Several Broken Ribs, MANY scrapes and bruises (right side), and gash on her forehead." She spent five days in the hospital before being discharged and is hoping to complete the race next year (she was only five minutes from the finish line).

The Mount Marathon is an annual race in Seward, Alaska, held every 4th of July. It's only the distance of a 5k, but it's a brutal climb to the peak -- 3022 feet above sea level -- and then a dangerous dash back down the mountain. And it was especially dangerous this year (beyond Assman's fall) -- there is a runner with possible brain injury and another is feared dead after he went missing.

Search for runner to continue with trained volunteers only: Mount Marathon coverage

Organizers of a search for missing Mount Marathon runner Michael LaMaitre say they won't use untrained volunteers Friday because of hazardous conditions on the mountain.

Organizers are considering rule changes for 2013.

A women ran for 24 straight hours on a treadmill. HAHA NO THANKS!

"They were on top of me, just biting my arms and legs and sides," she said Tuesday. "I was just trying not to let them get to my face." There is nothing funny about this story. Nothing.

Ultrarunning: How to Crew for Your Runner | Endurance Planet

There was a moment last month, during Yohan Blake's press conference before the Adidas Grand Prix in New York City, when all of the reporters in the room were confused.