Hydration while running is rather important. Unfortunately, water fountains aren't all that portable -- so let's take a look at hydration options designed for runners on the go.

Last week, we had a bit of a discussion on what to do with the stopwatch when out on a run. In the discussion, water bottles came up. dancing.on.rocks was awesome enough to send me a remarkably in-depth review list of the different hydration packs he's tried out. I added the one pack I've used to the mix as well. This is in no way an exhaustive list, but a decent jumping-off point if you're looking for a pack (or are interested in 'features' of such packs). We'll have more on bottles/belt packs next week.

There are many ways to get your hydration during long runs: handheld bottles, waist packs, water fountains (or water stations sponsored by the local running store), bottles stashed along your route, but this article will focus on a handful of hydration vests (often called 'camelbacks' in reference to a brand very popular among the mountain bike set). 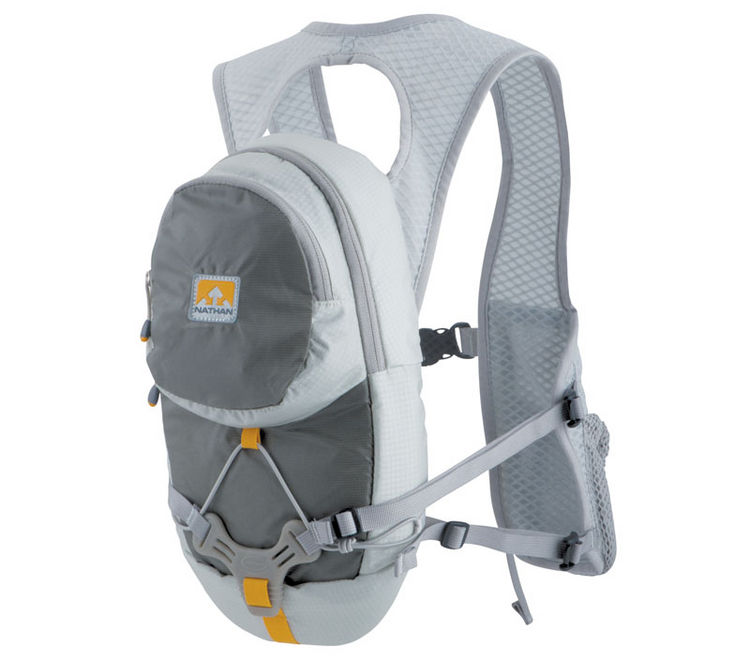 Nathan is one of the more popular brands out there with the HPL #020 or the newer Endurance being the models you see the most and the ones we'll discuss in the review. The 020 and Endurance are largely the same with some minor tweaks to the newer Endurance model. Those tweaks include an added 'pill pocket' and easier access to the water bladder in the back.

Comfort: The soft mesh fabric doesn't chafe and is comfortable to wear. I have worn it next to bare skin but in general I still prefer wearing it with a sleeved shirt. With a normal load it the balance of the pack is good. The Nathan pack is meant to be worn slightly loose. It shouldn't be tightly strapped to you. This is a very good thing since it means you have more freedom to breathe.

Storage: Front pockets are easy to manage while on the move, the lashing system makes it easy to carry a rain coat or other clothing. I've jammed a surprising amount of kit in there during self supporting runs that last in excess of 10 hours.

Comfort / Fit: The straps make it highly adjustable but once you start racing, any adjustments are down to the one strap across your chest. This would be ok but I find the pack really fits differently depending on how much stuff is in your pack, particularly the water bladder. I find myself fiddling with the strap a lot during runs. During a race, I try not to fill up the bladder more than 50oz since any more than that is where the fit really starts to go askew.

Water spout / hose design: All of Nathan's products seem to suffer poor design on the water valve. Their handheld bottles leak and the valve at the end of the hose on the Nathan bladder suffers from leakage as well. Most everyone in my running group has hacked off the Nathan spout or hose and replaced it. Camelback replacements are popular and I used a Osprey hose with mine. The other major issue is that the water clip has degraded over time to the point where the hose comes loose pretty easily. This can be distracting to deal with at times.

Summary: This is a great every day pack. It is durable. I've run thousands of trail miles in mine, roughed it up in the brush, and after a wash, it is like new. You will have to hack up a new hose solution but that is easy and cheap. At around $75 new, it is a fine value. 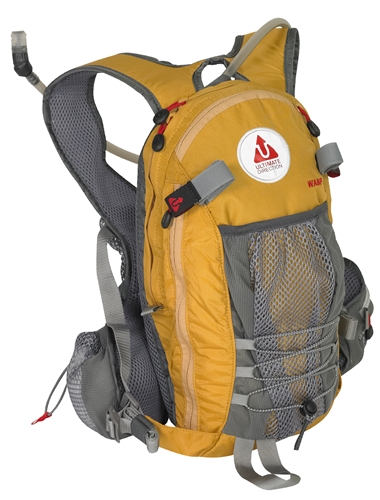 If this looks a lot like the Nathan, it may not surprise you to hear that it was the same designer. Ultimate Direction makes some of the best handheld bottles out there (the added finger loop on the lid is a a huge help).

This review is can be summed up as very similar to the Nathan HPL series, so I won't rehash all the same details. There are a few key difference including huge front pockets and even more storage. If I had to pick up a new every day pack today, this would probably be the first one I'd look at. The only downside is that it is about a half pound heavier than the Nathan dry. Not a huge deal but the price you pay for more pockets and slightly heavier duty materials.

What I don't know is if they have solved the little nits like water valve leaking or clip not holding the hose.

The s-lab series is born out of the product design specifically for Salomon elite runners. This is produces some amazing gear with some trade-offs for your average runner. 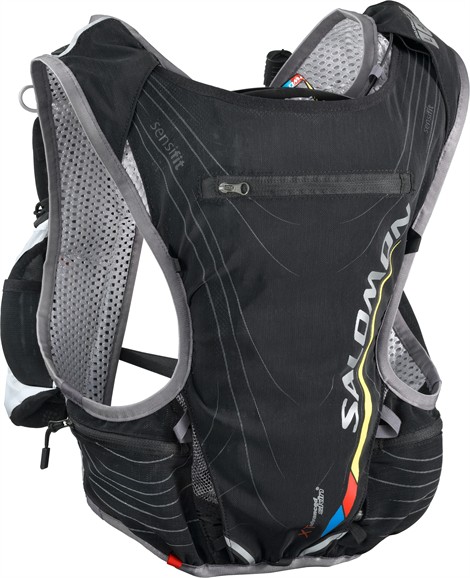 Fit and comfort: This thing is an awesome fit and provides comfort, I've not found in any other pack. Some of that has to do with the decision to install a 50oz bladder. 50oz seems to be about the edge of what can be used and not overly affect the shape and weight balance of a pack. But even comparing the S-Lab 5 to other packs fill with only 50oz, the S-Lab wins handed down. Solomon adds water bottle carry pockets that ride near the ribs. They do work and while it feels a bit odd while walking around, during a run, they actually are not noticeable. In general, I choose not to use the water bottles and either get by on 50oz (which is usually more than enough during a race) or carry a handheld.

Rather than an adjustable back / side strap system, the S-Lab series opt for a unibody approach and multiple sizes. Here is where the first trade-off happens. Salomon is a european company so the sizing may not work for some runners. If you have very board shoulders, I'd probably not recommend the S-Lab 5. The S-Lab 12 does size up better. The benefit, however, is a more comfortable and stable fit. With other packs, all the weight is one the shoulders, with the Salomon, the improved fit seems to shift some of the weight to the core.

The front strap system provides 4 across the chest straps and a couple near the shoulder. I find that I don't have to fiddle with the adjustments during a run like I do with the Nathan or Ultimate Direction. For me, it is largely set and go.

Storage: The S-Lab carry a ton of stuff. They were built with races like UTMB and other European races in mind where there are stricter rules about required mountain running gear. I do find the front pocket setup a bit odd and not nearly as easy to access compare to other packs. Several decisions here seem geared at very specific preferences of Salomon elite runners. Overall, it works though once you get used to it. I used the big pockets meant for the water bottles are my fuel storage area and leave the detachable gel storage unit off. The little pockets on the side back are used to store trash since otherwise you can't really see what you are reaching for in them.

Water bladder: While nominally the same design as the Nathan, I find the valve does not leak like the Nathan's valves. The other change is the hose is brought up under the arm towards the chest. The system works very well overall with the only drawback being that there isn't an attachment to clip the hose in place. To this day, I am not exactly sure how it is suppose to work but I have an approach that suits me well enough and is not a distraction.

Durability: The S-Lab doesn't come across as durable as Nathan or Ultimate Direction. For the price, you would hope it would be rugged but the S-Lab is more about cutting edge and design. Company sponsored elite athletes don't have to worry about rugged gear since they just get new gear for free as it wears out. There are shoes in the S-Lab line up that are good for maybe 150 miles of racing. That doesn't cut it for the average runner like you or me. The Advance Skin S-Lab packs don't seem that fragile. I've raced and worn them for a few hundred miles without any noticeable wear and tear but overall the material on the back is lighter. What makes it a comfortable and lightweight pack also means that it comes across as not as rugged.

Summary: Likely the best performing pack available and a great racing pack but not something I'd recommend for every day wear. I keep it in the closet until a few weeks leading up to race day and then I break it out again.

To be clear up front, I've only tried one hydration pack -- a Camelback pack which was bought from REI and is designed for cyclists. I bought it when training for my first full marathon. I didn't know that the for-cyclist-designed pack wouldn't be comfortable while running; I should have known better. I haven't taken the pack out cycling, but I have a feeling it works far better for its designed purpose. 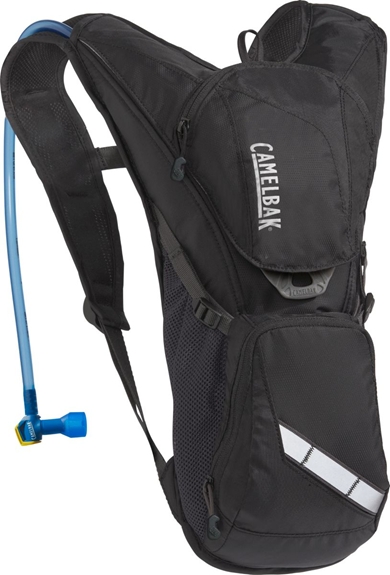 Rather than try to review the exact model (it was bought ~5 years ago but is similar to the Rogue pack that Camelback sells currently), I'll just point out the reasons that buying a made-for-cycling pack is a horrible, horrible idea:

1) The shoulder straps aren't designed for vertical movement. Even the smoothest runner has a bit of bounce to their step. This is hugely important when wearing a shoulder-loaded pack: wider straps -- like those on the packs d.o.r. reviewed -- will disperse the weight load and reduce localized pressure. The straps dug into my chest/underarm horribly and caused really bad chafing -- far worse than typical chafing that occurs between legs on 20+ mile runs.

2) The pack moves around. A lot. This is compounded when you factor in the small shoulder straps. In addition to rubbing hard against shoulders, the pack constantly slapped against my back.

3) The storage pocket is small. A minor gripe, but a real one.

4) There's only one securing strap, located high up on the chest. A second, lower strap would do wonders for this pack in terms of long-term comfort and chafing.

We'll get to hand-held bottles and belt packs next week. Any of y'all use hydration packs? If [Y] which one and do you like it?