The Korety Stringer Institute was on-site with the Timex Multipsort Team to test their lactate thresholds. And then when the real athletes were done, they let me try it.

Share All sharing options for: Lactate Threshold Testing with the Korey Stringer Institute

"Damn girl, you can suffer."

Trista Francis had just completed her lactate threshold test at the Timex Multisport Team's training camp, hitting a number higher than her male counterparts, and teammate Chris Thomas, USA Triathlon's Men's Masters Triathlete of the Year, is blown away.

Francis' personal assessment? "I have some work to do still, but its early [in the season]."

If you're going to make your living as a professional triathlete -- or any endurance athlete, really -- you're going to have to suffer. You'll have to reach physical limits you didn't think existed, and then push past them. But how do you measure what those thresholds are? How can you accurately determine where you should be training to help improve the level of punishment your body can take? One such way is a lactate threshold test.

A key competent of the annual Timex team camp is testing with one of its partners, the Korey Stringer Institue, named after the NFL player who collapsed and died from exertional heat stroke during Vikings' practice in 2001. Following Stringer's death, his wife established the institute to honor her husband's legacy and hopefully help others, through teaming with Douglas Casa, Ph.D, ATC at UConn.

Last year, the folks at KSI submitted the athletes to a sweat electrolyte testing, and in 2013, it was lactate threshold -- the point during exercise when "the lactate [lactic acid in the muscles] concentration in your blood rises to levels that are greater than your body can clear." For this particular test, KSI used the Onset of Blood Lactate Accumulation (OBLA), or the moment when your body can no longer convert lactate to glucose in your liver. Basically, it's a measurement of how hard and long you can run, and as you can imagine, triathletes suffer.

And once they were done testing the real athletes, they let some blogger give it a try (hint: me)!

After answering some basic questions about my medical history, they measured my body fat percentage with those middle-school calipers (I was 10.6%) and then the doctor put a catheter in my arm. 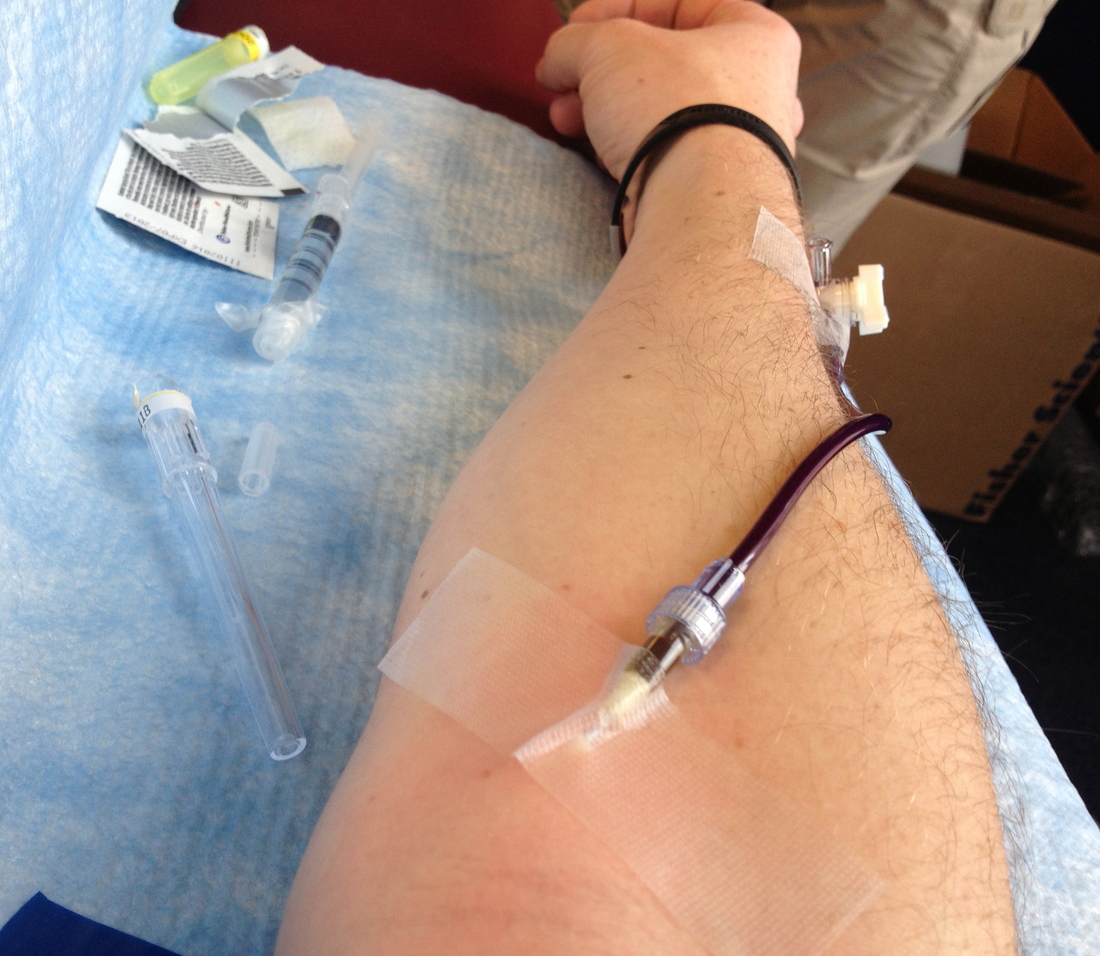 With a needle and plastic tube hanging out of a vein in my arm, it was onto the treadmill (with a 2.0 elevation), where after getting warmed-up, the test began.

I'd run for three minutes, straddle the treadmill while they took some blood (hence the catheter), and then hop back on the treadmill, with the speed increased. The blood was used to determine my lactate levels, while another person recorded my heart rate, speed and perceived effort at every interval. Here's how I tested:

So what's it all mean? In short, I can run an 8:49 pace for about hour before my body would no longer be able to keep up with the lactate I was producing. And when the body can't keep up, that's when your legs begin to feel sluggish and start to burn with lactic acid. I felt like I could've kept going with the test, but anything over 4.0 is basically your lactate threshold, and I was at 4.7. I say that because as it is now, I can maintain speeds faster than an 8:49 pace -- for example, I ran for 50 minutes with an average of 8:17/mile the other night. But with traffic lights and hills, one of my weekly runs probably isn't the most accurate measurement. Hence the treadmill, I suppose.

The folks at KSI said it was a "good test," because my perceived effort was consistently inline with what my heart rate and lactate levels were showing. So that's good. And now going forward, I can use this data -- knowing what's the "right" heart rate zone to be in.

And for comparison's sake, Trista Francis hit 11.4 on her test, while Bo Parish hit a 7.7. 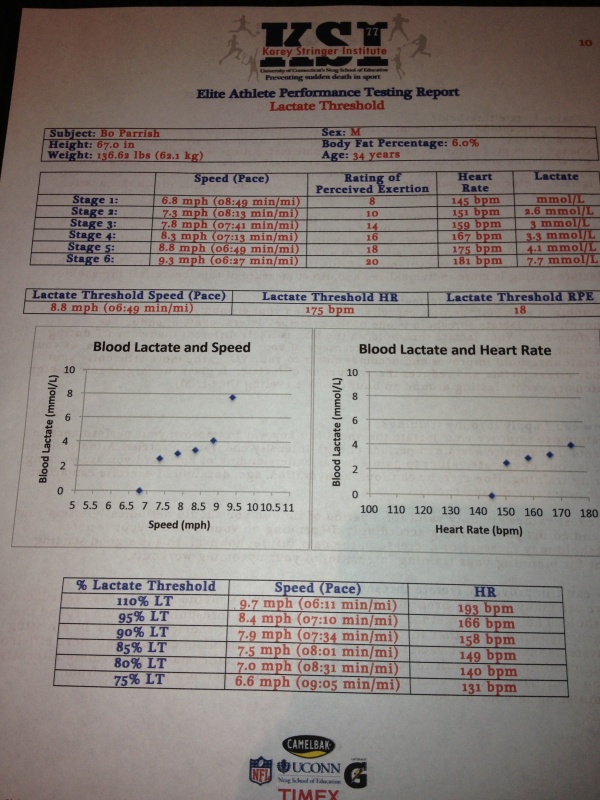 Never before have I felt so out of shape. Thanks again, Timex Sports and KSI!