Another week of preparing for Rev3 Williamsburg is in the books, and judging by the 30 minutes or so of leg drains I did on Sunday, it was a rough one. Forty-four miles of cycling and 11.45-miles of running on Saturday and Sunday left me feeling pretty spent.

The rain held off enough on Saturday that I was able to get outside for a great bike ride -- my Felt B12 makes 2.5 hours of cycling far more comfortable than it probably should be. But that ride did leave my legs feeling sluggish for Sunday's 90-minute run, so that ended up being slower than I would have liked, but I chose a hilly course for a change, which definitely had an impact on my overall pace:

Anywho, the week that was: 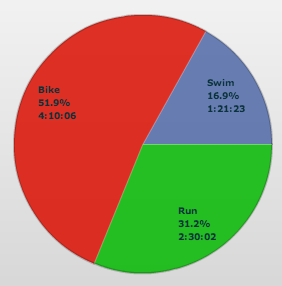 Looking Ahead: More of the same, with one more build week before some recovery next week. This week's training plan is capped by a nearly-three hour bike ride and a long run of 100 minutes.

And here are some links I found neat and/or interesting:

Wilson Kipsang of Kenya Wins Half-Marathon in New York - NYTimes.com
With a time of 1:01:02, Wilson Kipsang won the first major road race in the city since Hurricane Sandy forced the cancellation of the marathon in November.

1 Dead, 30 Hospitalized in Tel Aviv Half-Marathon | News from the Field | OutsideOnline.com
One runner died and 30 were hospitalized at a half-marathon race in Tel Aviv after 90-degree temperatures caused widespread dehydration and heat stroke.

An Amazing Race Photo of the Bond Between Runners | Runner's World & Running Times
One marathoner helps another across the finish at Rock 'n' Roll USA.

Suan Juan Recap
Denmark's Helle Frederiksen and American Andy Starykowicz battled the heat and winds, not to mention the tough fields, to take the wins at IRONMAN 70.3 San Juan Sunday.

The Boston Marathon Course and Weather piece by Gordy Megroz in Outside Magazine's April 2013 issue extensively features our analysis of what to expect on race day, from start to finish, in sun, rain, sleet or snow. Further, it builds on our analysis of correlation between Boston Marathon weather and finish times, which was featured in Outside Magazine's April 2012 issue.