A long, frustrating and disappointing day leaves the author wondering if more half Ironman-distance triathlons are in his future.

The day began with hopes of breaking the six-hour mark.

The day ended with me questioning why I do this stuff.

Indeed, the Rev3 Williamsburg Half Marathon was one of my more frustrating and disappointing days. It was especially frustrating because I felt more prepared for this race than any race prior.

I purchased a training plan through the DC Tri Club that came with day-by-day workouts, a coach, access to clinics and a community to help answer questions and alleviate any uneasiness. Over four months of training, I missed only a handful of the scheduled workouts, if that. It was my first half Ironman with my new tri bike, a 2012 Felt B12 (to which I had just been professionally fitted).

I (thought) I had dialed in my nutrition (more on that later). I spent the day before the race with a final brick -- 10-minute swim, 20-minute bike, 10-minute run -- at the actual race site. I felt confident and prepared. Before the swim started, I surprisingly didn't feel nervous.

All of that combined to make me feel ready for a great day. But the race had other ideas. 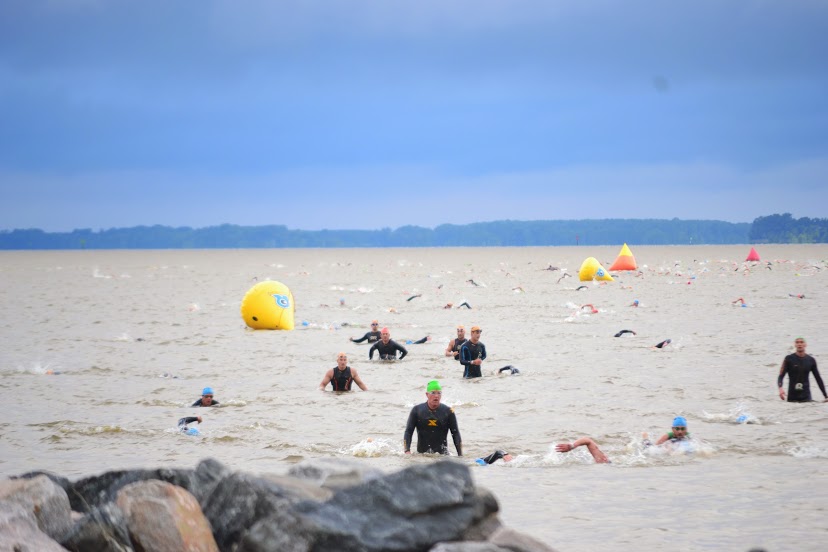 I got passed by a blind guy, which about sums up how my swim went.

The opening 200 yards or so of the swim was really a run -- the James is very shallow at first, probably only 2-3 feet deep. I finally dove in and -- thankfully -- had no breathing-related, panic-induced issues. Almost immediately I was in a good rhythm, headed for the first turn buoy ... which I finally reached, some 20 minutes later. And that was just the beginning.

Having made the turn, now I was swimming parallel to the shore, and directly into the current -- it literally felt like I was swimming in place. It is difficult to put into words the frustration felt when you sight the next buoy, put your head down and swim hard for 10 minutes, then look up again and swear you're no closer to said buoy. It was around this time I began to notice my left arm was not really ... there.

I mean, it was still attached, obviously, but something was clearly wrong with the way I put on my wetsuit (or maybe it just doesn't fit properly?) because it was constricting to the point that my left hand was losing blood flow and the entire arm was nearly useless in the pull. I tried to adjust it a few times, but to know avail.

I thought about quitting roughly 17 times -- the kayak was RIGHT THERE -- but I have never DNF'd in a race, and I didn't want to break that streak. Through the current, and the borderline one-armed swimming, I finally made it back to shore, in an embarrassingly slow 1:17:42 (it should have taken me 40-50 minutes).

Turns out I wasn't the only one who struggled through the swim leg -- there are similar stories at Slowtwitch and Reddit, with the current absolutely wreaking havoc and inflating lots of swim times. In hindsight, I wish I hadn't worn the wetsuit -- the water was warm enough that I didn't need it, and I think I would've preferred the greater range of motion instead of the extra buoyancy.

I should note that this was not my first swim in my wetsuit, nor was it even my first swim in the James River (I did a different half Ironman in 2011), but on Sunday the conditions were stronger than anything I'd experienced before. Throughout the miserable swim, I kept telling myself that if I could just survive and move on, then I could hammer on the bike.

Walking the quarter mile or so from swim exit to transition, I took my time, and tried to get back into some positive thinking (with the help of my dad, who ended-up walking along side me, which I probably needed more than I realized at the time).

I stripped off the wetsuit, packed everything into my plastic bag (two transitions meant more logistical headaches like this), put on my helmet, grabbed my bike and headed out. I spent the first 20 minutes focused on getting comfortable, both in terms of my breathing and heart rate, before putting it in the big chain ring and opening it up a bit. 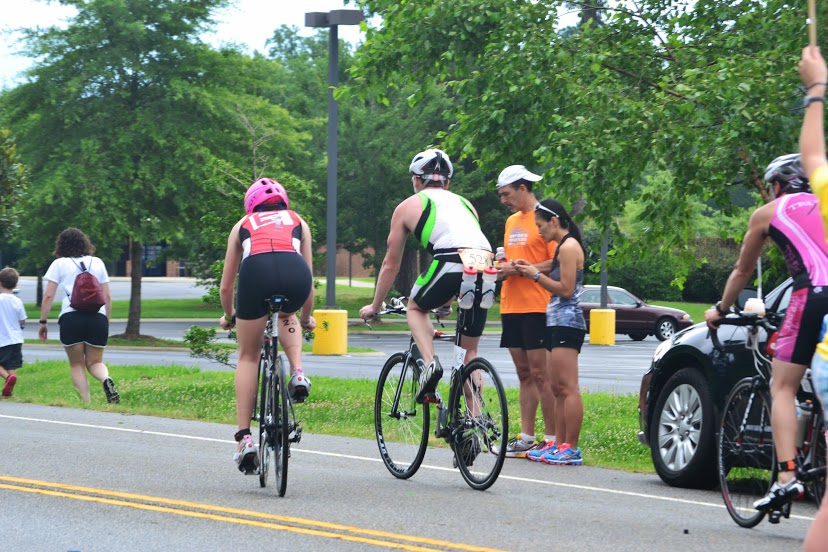 I felt great for most of the bike, and was enjoying passing those who passed me in the water. I took in three bags of HoneyStinger chews, two water bottles with five scoops of Skratch each, and grabbed three water bottles from the aid stations. In hindsight, I should've had a couple HoneyStinger Waffles (I just forgot to bring those race morning) and likely even more water (didn't have to urinate at all on the bike nor the run). The course was mostly flat, with a couple rollers, though the Virginia countryside, but was made-up of a few out-and-backs. I found myself getting a bit demoralized, biking back and forth on the same roads, and it was only made worse when both of my aero bar pads fell off (a combination of the morning rain, humidity and sweat was just too much for the glue, I guess).

Yes, as though the day weren't frustrating enough, I had to ride the final 15 miles or so with no pads on the aero bars. Just one of those days.

But then when it finally turned back toward T2, I felt reenergized and managed to pick-up my pace. In my half Ironman two years ago, I remember feeling absolutely exhausted around mile 40. What a difference two years, a solid training plan and a new bike make -- I still felt great at mile 56, and hopped off ready to run.

That excitement to run was quickly dashed, however. I spent the first 4 miles dealing with an upset stomach, trying to find a pace that wouldn't make me feel nauseous. I finally managed to settle into a good stride around mile 5 and shifted my focus to running from aid station to aid station. At the aid stations, I'd walk, and get water, Gatorade, a sponge for my head and then cola (a first for me). 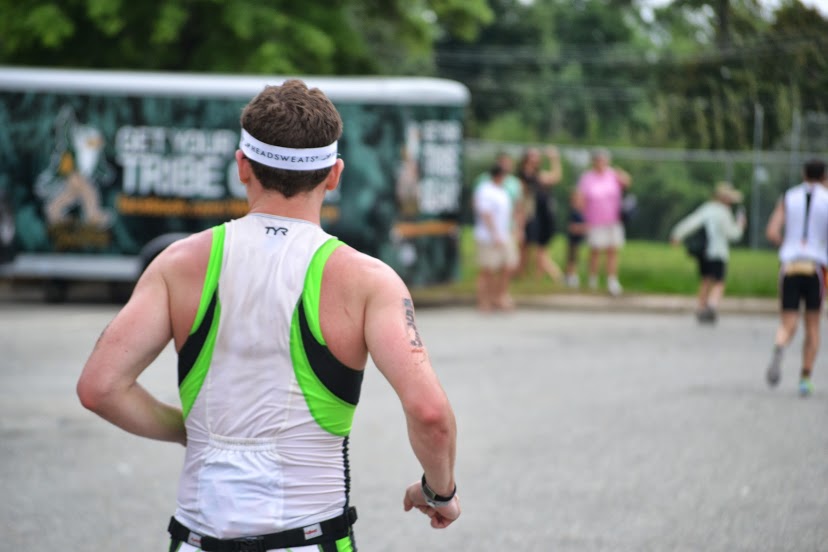 The run course was mostly flat with a few hills, but was two loops, and consisted of two out-and-backs, which meant you had to run past the finish line three times before finally turning down the chute on your fourth pass. It was great for spectators -- I got see my parents and brother and sister three separate times -- but was more than a little tough mentally.

Adding to the frustrations was the fact I was running all on perceived effort. In the morning, while setting up my transition, I turned on my Timex Run Trainer 2.0 so it could find the satellite ... but then forgot to turn off the sensors. So by the time I arrived for the run, it was dead. After training for five months with heart rate, this was an especially big curve ball to deal with.

I ended up crossing the finish line with a 2:21 half marathon (was hoping for something closer to two hours), which, competitively, ended up as my best leg of the day. 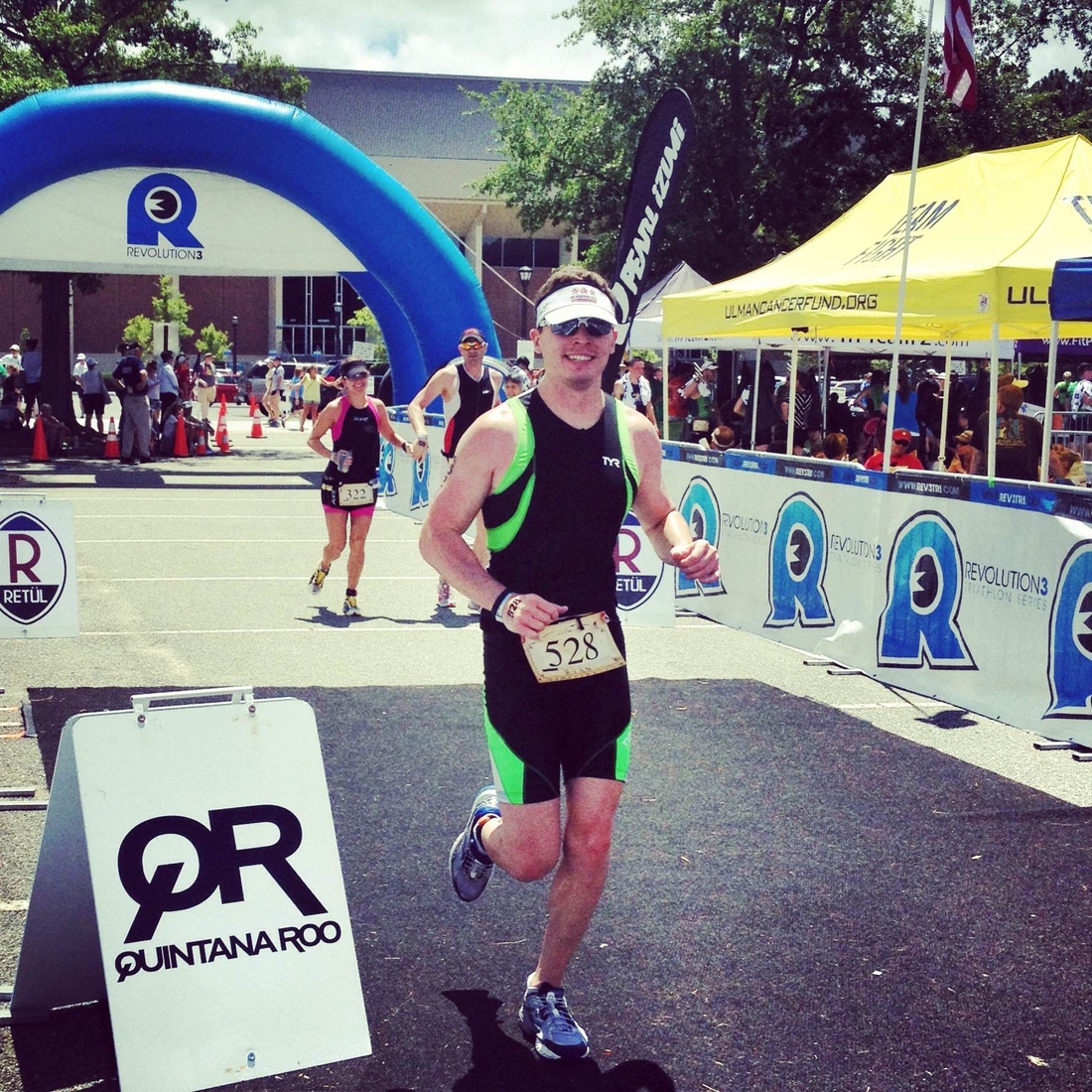 Like I said, I started the race with goals of breaking six hours. Instead I finished in 6:49. Disappointing, even if it was 14 minutes faster than two years ago. But I am my harshest critic, and considering all the challenges -- the swim, forgetting some nutrition, losing aero pads and not feeling great on the run -- I suppose it could have gone worse, and I have to just shrug it off and move on, chalking it up as a day of logging some mental toughness. Easier said than done, of course, after investing so much time into a training plan. But I am proud of myself for not quitting the swim, especially after reading that even a pro was contemplating the same:

It's during a swim like this that you ask yourself the question: "At what point do you give up?" I literally felt as though I was making no progress forward in the water. The second turn buoy never seemed to get any closer for quite a period of time. How long should you be willing to swim in and endless pool with an edge that never gets any closer? Luckily, I didn't have to answer that as the turn buoy finally made some perceptible towards-me movement. I reached the second buoy and made the last right hand turn.

But still, I wonder if the half Ironman distance is for me. I know some people aren't able to make the jump to Ironman because their stomachs simply won't allow the amount of caloric-intake needed in a race of that distance. Is my stomach similarly as sensitive? Or is my nutrition still not dialed-in? And should I just move on with triathlon and focus on the sprint and Olympic distance?

I still love the sport, and love training and racing, and I understand "embracing the suck", but seven hours of suffering is not as fun as say, racing for a bit more than two-and-a-half hours.

Just all part of the learning process, I suppose.