Warmer weather means more ticks in the New England area, and with it a higher danger for the area's trail runners.

The New England summer trail running season has begun, and experts warn a large population boom for ticks, the carriers of Lyme disease, is in progress. According to Reuters, a steady increase in the number of nymphal ticks is common this time of year, but the long winter postponed typical hatching patterns. Now that warmer and wetter weather is here to stay, long-dormant eggs are hatching at a higher rate.

"The next three to four weeks is the peak season of risk," said Sam Telford, an infectious disease professor at Tufts University and an authority on Lyme disease.

"That's when the nymphal ticks emerge and appear in large numbers. It's going to be gangbusters the next few weeks," Telford said.

This poses a major concern for New England trail runners, whose preference for the outdoors puts them at significant risk of infection, typically more so than urban runners who stick to streets, city parks and road races.

Named for Lyme, Conn., where several children with arthritic symptoms were investigated in 1977, Lyme disease has spread throughout the United States at an alarming rate. The infectious disease originates from at least three species of bacteria of the genus Borrelia, and is spread primarily by nymphal and adult deer ticks. Options for diagnosis and treatment remain limited and controversial.

The Trail Animals Running Club (TARC) of Boston knows this all too well, as several of its members have had close calls. Some have even been infected with the debilitating disease.

Shawn Whalen of Natick, Mass. is of the latter camp. "I had the infection last summer, and took doxycycline for three weeks," he says. 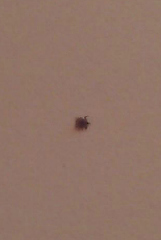 Photo of a nymphal tick TARC member Greg Stone pulled off his leg after a morning run / credit: Greg Stone

Last March, the infection returned as a baseball-sized swelling in his right knee, preventing further trail running and, in some cases, simple movements.

Area trail running and racing events have taken notice, too. At the 54th annual Mount Washington Road Race in New Hampshire, runners, drivers, spectators and volunteers were regularly reminded to check themselves and one another for signs of ticks.

Experts advise trail runners to cover up when and wherever possible, and to always check themselves and each other for ticks and tick bites during and after runs. If one is found, remove and preserve the tick as best as possible and contact a doctor immediately.