The elite U.S. female runner is ready for a record run in September.

Share All sharing options for: Shalane Flanagan talks training and fuel for Berlin

For Shalane Flanagan, the past few years have been a marathon of new records and personal bests.

The elite U.S. female runner set the event record at the 2012 U.S. Olympic Trials Marathon in Houston with a time of 2:25:38. A year later, she ran a half marathon personal best of 1:08:31 at the Rock 'n' Roll Mardi Gras Marathon in New Orleans, and claimed her fourth USATF title in the 10,000 meters event.

With her stellar performance at the 2014 Boston Marathon behind her (she finished seventh after leading much of the race), Flanagan hopes to take the U.S. women's marathon record (2:19:36, set by Deena Kastor in the 2006 London Marathon) at the 2014 Berlin Marathon on Sept. 28.

Stride Nation spoke with Flanagan in August about everything from training and fuel for Berlin, to Boston and the occasional beer. 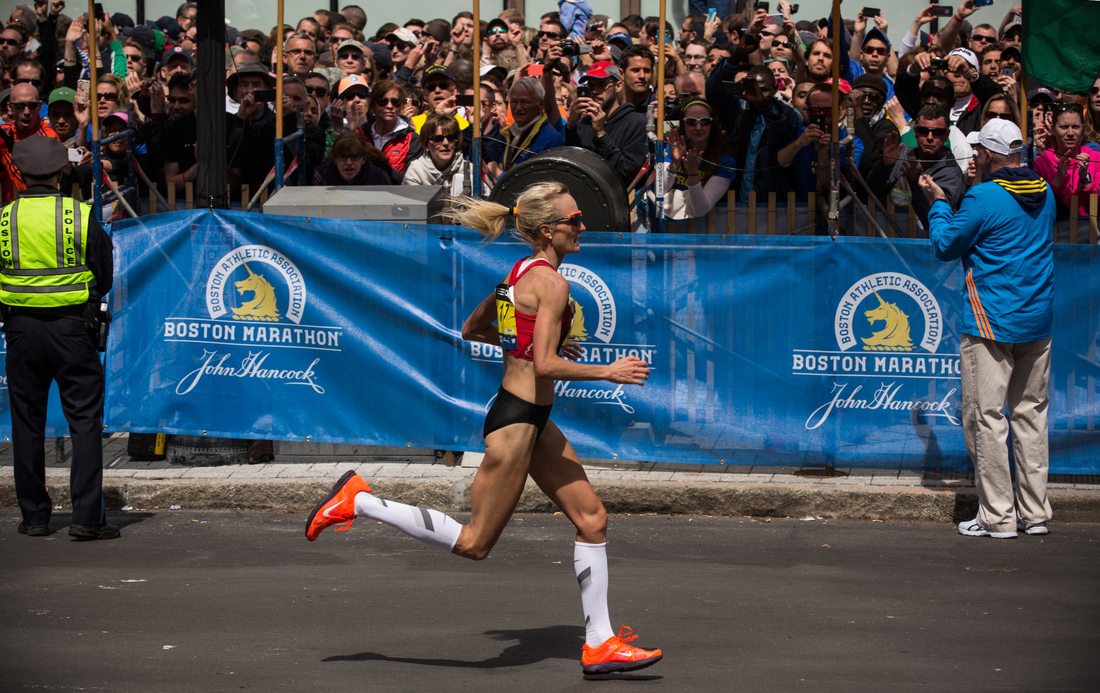 A little over a month to go before Berlin. How are you feeling?

Good, really good! I've had some benchmark workouts to let me know where I'm at. I'm ahead of my Boston training and gearing towards a certain pace that would warrant a pretty big PR. If all goes well, I stay healthy, catch a good day and good weather, I'm excited about the possibilities.

Berlin's an interesting race. It's so flat and level, which is why there's a strong history of records there. What have you been doing for elevation training?

For me, it's more about turnover. I think the tricky part about flat courses is that there's no reprieve. Your muscles are firing like a piston continuously. There's no up or downhill to rest the gears of your muscles. A lot of my harder efforts have been on really flat courses to stimulate using the same muscles over and over and having my legs turnover. I've done some high altitude training. Went to Park City, Utah for one month. Now I'm in Flagstaff, Ariz. for another month in preparation.

With six weeks to go, "typical" is a bad word to use, so I won't ask you what a "typical week of training" consists of. Instead, take us through what the past week consisted of.

Monday and Tuesday were typical doubles. Wednesday I had a really hard track session, comprised of some mile repeats and three-mile repeats. That was also the day I got to altitude here in Flagstaff, so I had to take that into account. Typical doubles again until Saturday, on which I had a three hour-progression run and covered about 27 miles. Sunday was a light double day. Mixed in with all that running, about two to three times a week I go to the gym for core work. There's really only one specific session for developing my leg speed or marathon pace, then one day is my long strength session. Some are easier or harder than others.

How much emphasis do you put on running with others when training for a race?

I thrive in a group or community. I'm really fortunate that, in Portland, we have a track club. The professional elite side is predominantly male. My teammate Emily and I are the solo women, but I thrive off of a community and its support. In Portland we have a youth group, sub-elite and masters, so a lot of people to run with. I run with the kids, the masters, so that's great. When I travel, I love places like Flagstaff because the communities really welcome other runners. I love being able to go off on my own, or contact them and meet up at any point.

"Fueling becomes more vital pre- and post-workout, and fueling on the run."

When you're getting ready for a big race like Berlin, especially when you're looking to set a new PR or record, how do you approach fuel?

I've taken my nutrition a lot more seriously since I started marathoning. Fueling becomes more vital pre- and post-workout, and fueling on the run. I've taken a lot more time to do my diligence and learn about it. With a marathon, being as lean and mean as possible is advantageous. You have to carry your body around for 26 miles. At the same time, you need to be healthy, so I'm fueling for peak performance. I've consulted with a lot of people about what I need to be eating, and I've had a really great relationship with KIND Bars.

I love them because they're really natural and low in sugar. A nutritionist friend said they're a great combination of protein, carbohydrates, fiber and fat that you need before or after a workout. I feel like it's helping me optimize my peak performance, and it's an easy go-to snack when I'm off on a trail for far away from my refrigerator. Basically, I've been a lot more diligent with my nutrition in the last year since I realized there's a strong correlation between nutrition and performance.

Was it just not something you were emphasizing as much in past training, or has it become more and more important?

We looked at percentages and how to maximize. There's little things that add up. You can be eating a low quality diet and think you're pretty good, but there's always room for improvement. I saw room for improvement in my diet, so I decided to take it more seriously. If I'm pound for pound the strongest I can personally be, I can achieve my own personal excellence. This past year, in Boston specifically, was the strongest I've ever felt. I felt really efficient, and I was healthy. There was a good correlation with what I was fueling myself with, and it motivated me to take it more seriously and pay attention.

What's your favorite guilty pleasure after a great week of training or a big race?

In training, I allow some wiggle room, and that would definitely be in the department of chocolate. Chocolates and wine. Post-marathon, I indulge in a lot of donuts. Right after the marathon, usually that day, a burger and a beer. So donuts, burger and beer post-marathon is my go-to, as long as it's within reason. But in training I do allow some wine and chocolate for a pat on the back.

The 2014 Berlin Marathon is set for Sept. 28. Follow Shalane on Twitter at @ShalaneFlanagan, and check out all of KIND Snacks' products at www.kindsnacks.com.