The Increasing Prices for Entering Marathons

Share All sharing options for: The Increasing Prices for Entering Marathons

If you plan on running a major marathon in the United States this year, you should probably prepare yourself for a bit of sticker shock. The registration fees for marathons has been increasing steadily over the past decade so and most of the big races saw a hefty uptick this year.

The priciest race in America remains the New York City Marathon which will set you back $255 if you are a US entrant. That's a 65% increase over the past five years for a race that cost just $60 to enter in 2001. While NYC leads the pack, it is not alone. The rest of the country's premier marathons have been steadily increasing their registration fees as well. Both Boston and Chicago will put you back $150 if you were lucky enough to register before they filled up.

Here's a graph comparing the prices of five major US marathons over the past half decade: 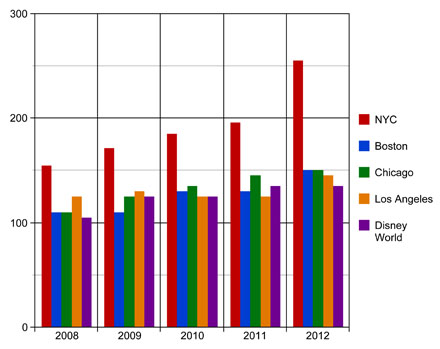 It's not just marquee events are getting more and more expensive. According to FindMyMarathon.com there are no less than 41 marathons in the United States this year with an entry fee over $100. Still, there are bargains are out there to be found. The site reports the median price to enter a marathon in 2012 is $65.

But the fact is, budget minded runners are feeling the pinch in their wallets.

This all is happening as marathons are more popular than ever before. According to MarathonGuide.com, more than half a million people finished marathons in 201 -- a 7.8% increase over the year prior. In fact, the number of marathon finishers has increased every year over the past decade and shows little sign of stopping.

In this respect, marathons are something of a victim of their own success. The larger the event, the longer the course has to stay open. That translates into a bigger price tag. But other factors are driving up race prices as well. As cities are struggling with tighter budgets, they are passing on the ancillary costs of hosting races to the events themselves.

That has been the case of this year's NYC marathon. Last year the city's police department boosted the amount they charged the event for traffic control and other services. Even though the group that organizes the NYC marathon signed a five-year deal with ESPN to broadcast the race, the burden of the increased costs was passed on to the regular entrants through the drastically increased registration fees.

For destination races like New York and Boston, the price increases are probably sustainable due to the desire of runners to participate no matter what the cost. Even with the increased registration fees, the price of the race itself remains a fraction of the overall expense of traveling to the city to participate in it.