Share All sharing options for: Shoe-Fitting: It's a Process

After running my last pair of running shoes into the ground, I thought it best to heed my own advice and get fitted for a pair of new kicks. This meant a few things: 1) acknowledging that my old shoes were in fact dead; 2) going to a real, actual shoe store; 3) running on a treadmill. The first part was the easiest -- those shoes were dunzo.

To deal with the other points, I headed out to the Georgetown Running Company (the one in Georgetown, obviously) to get me some shoes. I bought my last (now defunct) pair there and when Ryan suggested we meet there it seemed as good a choice as any in the city. We showed up a little after noon on a Sunday -- I forget how bad parking in Georgetown can be from time to time -- and went in to talk with our trusty guide (Matt).

I initially talked with Matt about my needs: 1) a new pair of shoes, possibly transitioning towards a lower heel-toe drop; 2) my old shoes, Nike Vomero 4s with 1150 miles on them; and 3) my specific training plans for the next few months (nothing, beyond lower leg recovery and eventual buildup). We discussed the kind of shoe that I would be most comfortable in in the short-term versus any sort of transitional move -- by wearing a new shoe similar to my old pair (just with intact midsoles) I should be most comfortable, depending on the fit. 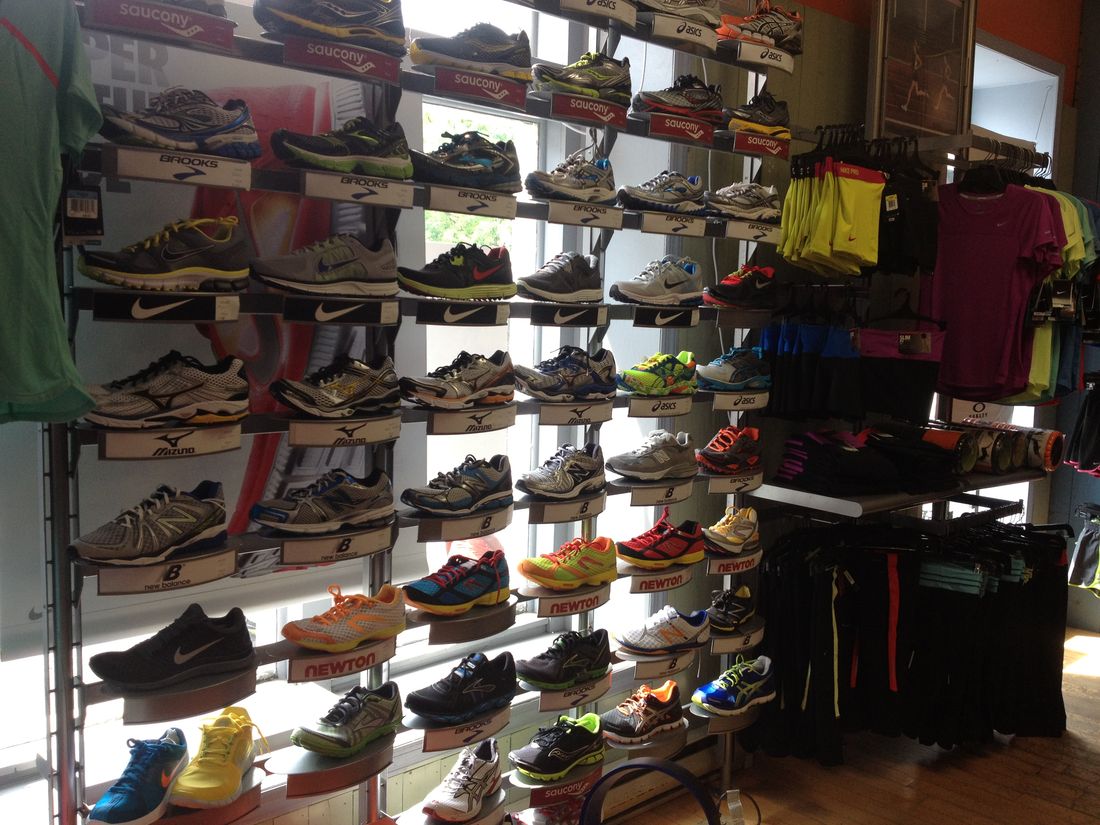 Once we discussed what I was looking for (or more accurately what thought I was looking for) it was time for the fitting test. The good old Brannock device was brought out, my feet measured, and the verdict was in: my feet are 9 EE. This limited our options; certain shoe makers tend towards wider lasts. We'd start with Brooks. 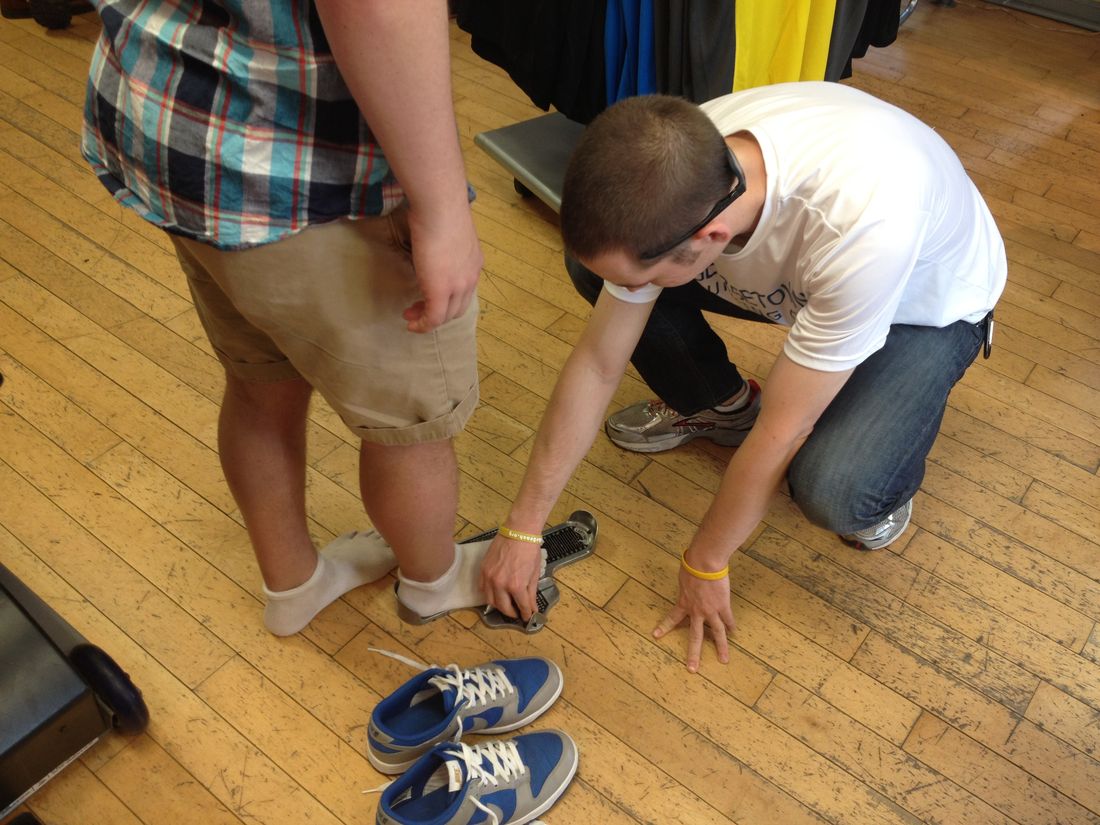 The first shoe I tried on was the Brooks Glycerin -- a wide-forefoot neutral cushioned shoe similar to the Vomeros that I'd previously worn. These shoes, as the first test, would end up on the treadmill with me for a gait evaluation. This meant running on a treadmill with a camera all zoomed on my calves. After 30 seconds or so we shut down the treadmill and Matt played back a video of my gait in slow motion, allowing for evaluation of pronation and foot strike location. This info would serve as a basis for the following shoes that I was to try on; neutral-to-minimal shoes were brought out from every possible vendor. 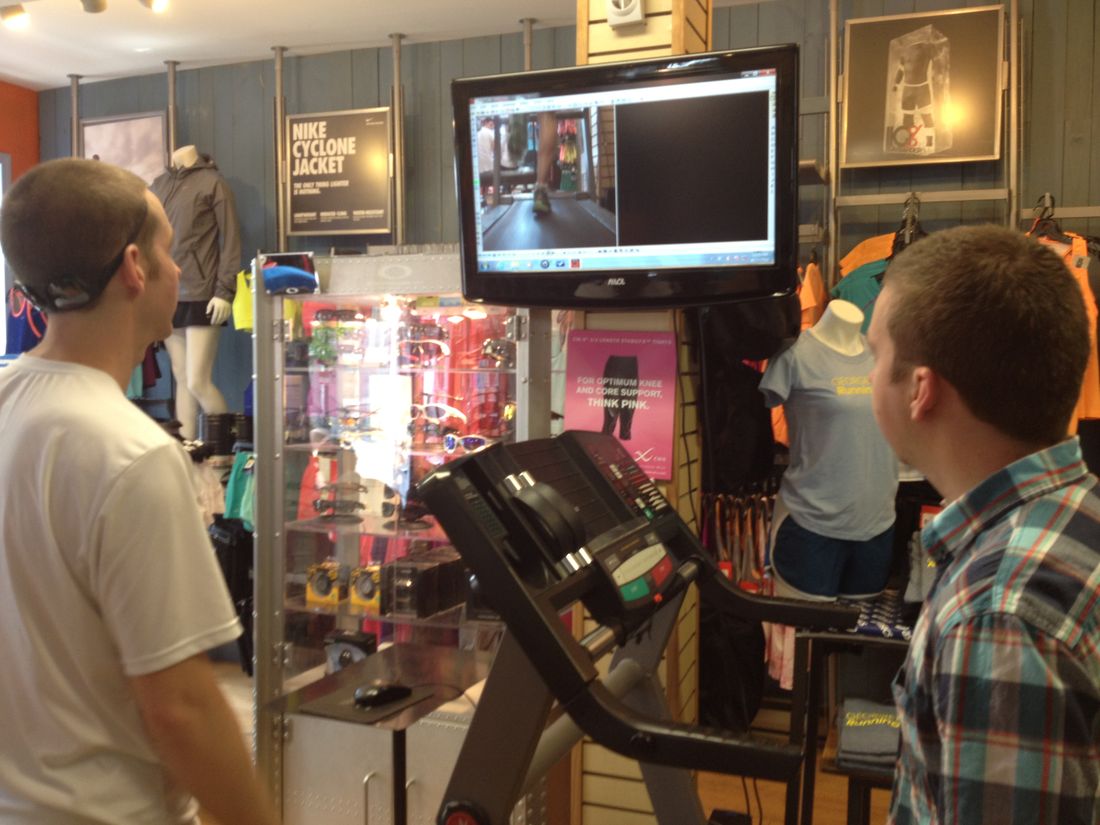 The initial fit of the Brooks was quite good -- as I said last week they're quite stable and provide a platform for my entire foot -- so it served as an excellent baseline for the shoes to come. I tried on at least five pairs of other shoes, only to find that each was either tight in the forefoot or lacking under-foot support. Eventually, I tried on a pair of New Balance Minimus Road trainers -- shoes that I've heard wonderful things about -- and found them to be great in the upper and horrid for me under-foot.

After trying on the Minimii (?) I tried out a pair of Newton trainers. Having never worn a pair, I took them out for a one-block jog, only to find the mid-foot lug to be uncomfortable and more mentally challenging than I think running should be.* 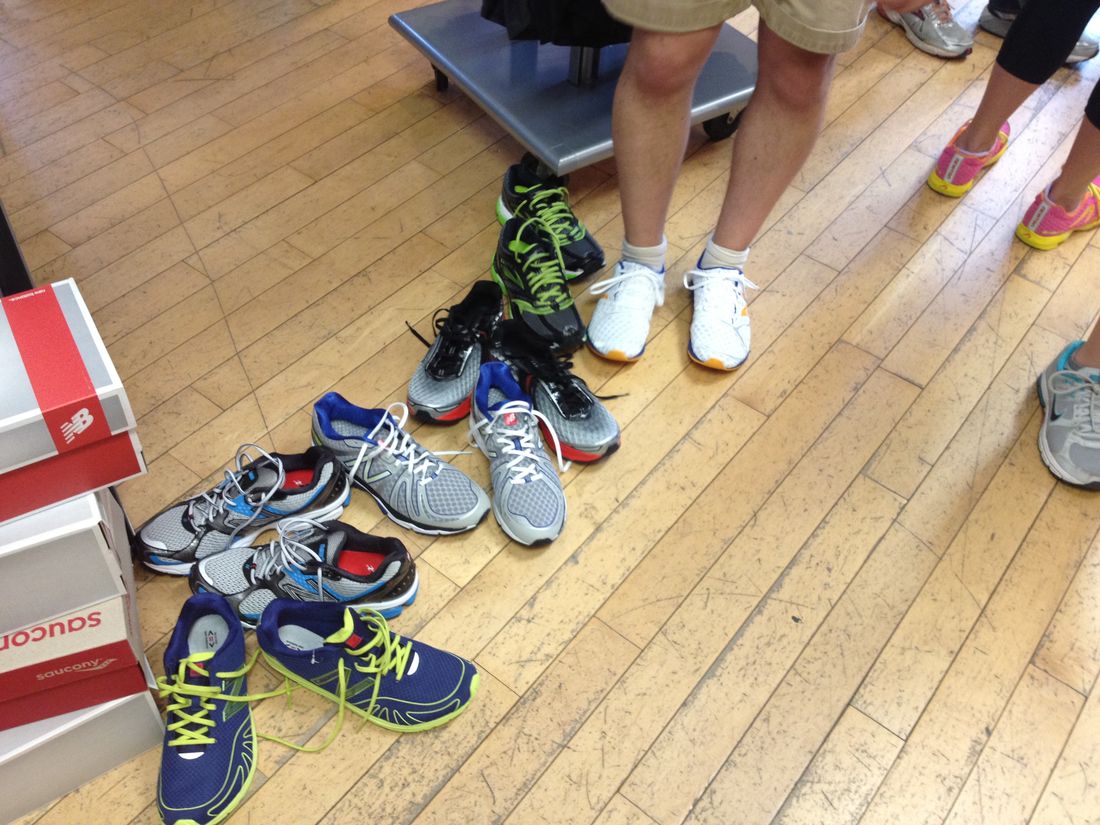 After giving the Newtons a go, I decided on the Brooks given they fit my foot best. This is the real advantage of going to a local running shop: they have lots and lots of shoes to try on. Without this process, I would have ended up in shoes that didn't fit -- a sub-optimal outcome to be sure. Granted, it's possible to send shoes back and forth to Zappos for free -- but doing so would take time and wouldn't get me out on the road in new shoes quickly.

Beyond trying on a myriad of shoe models, I was also given the chance to see my stride by going to a shoe shop -- something that isn't readily available elsewhere. Guessing one's stride off of wear patterns on old shoes is possible but inaccurate; video can give much more info in a far shorter timeframe. By watching my footfall I'm now able to better understand my stride, albeit only from one perspective.

I had a very positive experience at the shoe shop (aside from the requisite attempt at a plus-up sock sale on my way to the register). The staff was friendly, knowledgeable, and not over-bearing. There was no reluctance to show me additional shoes, nor was there any pressure to buy any specific pair of shoes. I went in with a somewhat firm notion of what shoes I wanted to buy and left with a completely different shoe based on feel, comfort, and my own gut feeling. I'll go there again in the future without hesitation -- though I won't be waiting 1150 miles next time.

* This is not to say that I don't think I could ever find the Newtons useful. I just don't think they're a full-time trainer for me right now.