Usain Bolt struggled in his 2013 debut Wednesday night, running his slowest career time in the 100m at the Cayman Invitational.

Usain Bolt's 2013 began in disappointing fashion Wednesday night at the Cayman Invitational. He won the 100 meters, but did so in 10.09 seconds, making it the slowest run of his career.

Bolt only grabbed the race lead with roughly 40 meters to go, and still almost lost -- he only narrowly edged Kemar Bailey-Cole, his training partner in Jamaica, when Cole appeared to ease up.

Having his trainer partner seemingly take his foot off the gas -- and the awkward TV angle -- fired up the conspiracy theorists, but Bolt's agent released the image from the photo finish, showing that the fastest human ever did indeed cross the finish line first, albeit it barely: 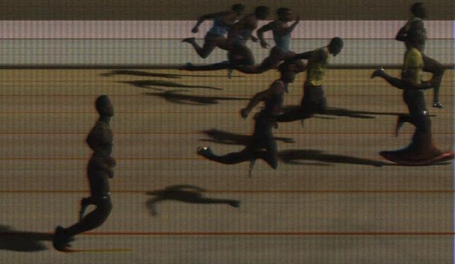 Bolt came into the race with a known hamstring injury (he withdrew from the Kingston Invitational last Saturday with a minor strain), but refused to blame Wednesday's performance on that:

He added that he'll "have to go back and figure out with my coach what went wrong."

So what to make of all this? Is bolt past his prime? Is he more injured than he's letting on? Has he become lazy?

Based on Bolt's history, tonight's hideous 100 means a) His back is hurt, b) He hasn't been training or c) Wake me up in August