To help raise awareness for RunningWorks, Meredith Dolhare is running the Badwater 135 ultramarathon. Stride Nation spoke to her just days before the race, about motivation, coffin-sized coolers, a plan if her shoes melt, and blister management.

Monday's forecast in Death Valley is 120 degrees. Both Tuesday and Wednesday are expected to see highs of 118. The low over this three-day stretch is 90 degrees. But what else would you expect from a race that starts in a town called Furnace Creek?

And it's in that heat that 100 runners will set out on a 135-mile ultramarathon, through some of the most unforgiving terrain on the planet -- this is the Badwater Ultramarathon, the world's toughest footrace.

The race begins 280-feet below sea level in Death Level, the lowest point in the Western Hemisphere. By the time runners cross the finish line 135 miles later, they will have climbed to a point 8300-feet into the sky, because Badwater -- cruelly, nearly inhumanely -- asks competitors to run the final 13 miles up the side of a mountain:

The race consists of just 100 runners, and all of them are able to toe the start line Monday morning by invitation only. The application process is lengthy and complicated, but most runners won't get past the Qualifying Standards, which requires previous Badwater finishes, three 100+ races, or finishing the Brazil 135. But even that isn't a guarantee: "In addition to meeting at least one of the three qualifying standards listed above, the ideal applicant will have extensive experience in ultra endurance sports, defined as at least five years of participation in ... [Ultra Running, Ultra Triathlon, Expedition-Length Adventure Racing, and/or Ultra Cycling]."

One of the lucky 100 is Meredith Dolhare, a member of the Timex Multisport team and someone who lists her favorite running distance as a "100-Miler."

Dolhare's previous accomplishments could double as a list of the world's most challenging endurance events: five Ironman triathlons, including the World Championship in Kona; JFK 50-Miler; Iron Horse 100-Miler; Rouge-New Orleans Ultramarathon (twice); Bartram 100k; Worth The Hurt double-marathon; Brazil 135 -- and that's all in the past two-and-a-half years.

Dolhare will be making her first attempt at Badwater, and then, just three months later, will compete in October's Furnace Creek 508-mlle bike race. If she finishes both events, she'll become just the sixth woman ever to do so in the same calendar year. She is running to raise awareness for her non-profit, RunningWorks, which was founded in April 2012 to encourage the homeless community to empower themselves with the values she accrued through running.

I spoke to Dolhare just before she left for her trip, where she was busy finalizing plans once she landed in Vegas.

"Since there's nothing out in Death Valley, we're stopping by a Bass Pro Shops to get a lot of the gear. I need to pick-up a coffin-sized cooler."

"We have a coffin-size cooler -- literally -- that I sit inside that we're picking up at Bass Pro Shops, so if i need to lower my core temperature I can dunk into that."

Welcome to the Badwater 135.

Running Badwater is never a solo effort -- Meredith will be helped along the way with a six-person support crew, who will assist in everything from cheering to swapping out hats and bandanas to "blister management." And Meredith's crew is one of the best in the business:

I've been really super-blessed with having an amazing support in Charlie Engle, a five-time Badwater finisher and a legend in the ultra-running community. He ran across the Sahara Desert in 111 days -- 45 miles a day, without a day off -- so he's got incredible experience in the heat [Ed. note: For more on Engle's run through the Sahara, check out his documentary, "Running The Sahara"].

what do I do about the 200-degree surface temperature?

And then Mosi Smith is very, very accomplished ultra-runner -- he's actually on the cover of the race magazine, so I think I've got a pretty good crew.

It's been on my list for forever. Why? The why is because it's notoriously knows as one of the hardest races in the world -- if not the hardest. And anything that says it's the hardest, sign me up -- I want to try it.

The harder the better -- if it's insanely long and stupid, I want to try it. And not only do I want to try it, I want to see if I can get myself prepared to do well in it. If it doesn't scare me, I'm probably not interested in it.

To help get her body ready for running in the heat, Meredith put together a self-made "hotbox" -- a treadmill surrounded by space heaters in a room that reached temperatures of 120 degrees.

Lots of people layer their clothes and run outside, and I did do some of that -- I would wear pants, and a couple long-sleeve shirts and run outside. But I had the opportunity because my kids have this treehouse, and their older now, and we had an extra treadmill from my grandfather, who was the most supportive person of my athletic career, before I met my husband. My grandfather passed away last year, but he would just think this was the greatest thing, that I put his treadmill in my kids' treehouse and with space heaters around it.

And the greatest thing about it is there's no airflow. That thing got SO HOT. 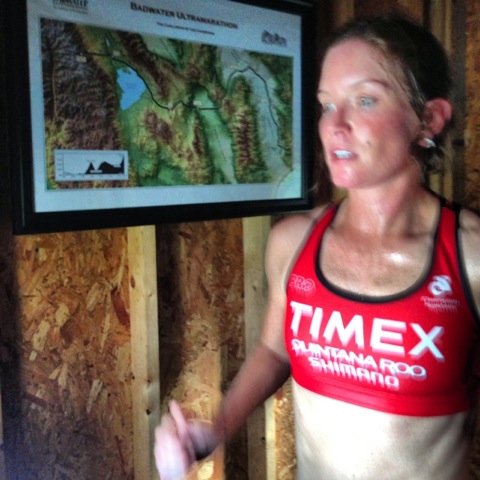 And I'd spend like two-and-a-half hours in there. I'd do mile repeats ... then I'd take the incline up as high as it would go to simulate Mt. Whitney. I had the course map on the wall, and that would keep me focused -- it's not like there's a TV in there or anything.

A necessary evil of running Badwater is dealing with blisters. Horrible, horrible blisters. So how will Meredith tackle her own "blister management"?

When I did the Brazil 135, I got some pretty bad blisters, but they didn't really start to bother me until about a marathon left, but that was only because I took my socks. But luckily a Badwater runner was there, and I asked him, "What should I do? Should I pop them? Should I wrap them in duct tape?" He helped so much -- at that point, I couldn't get my shoes back on -- he helped me wrap my feet, and put my socks back on, and then it's a mind-over-matter thing.

So, for Badwater, that's my mindset -- it's going to happen, and I'm just going to have to suck it up. It's just a part of Badwater. So hopefully I have the right socks, and I've got five pairs of Newtons -- thanks to them -- so in case a pair melts, I've got other pairs.

Running 135 miles through the middle of the desert takes a lot of out of you, and a nutrition plan is just as important as the months of training a runner does. How will you keep your body fueled while running?

I take in no solids. At all. Not one. I can't tolerate solids at all when I'm racing. I use Generation UCAN -- it goes in and starts metabolizing the fat stores you already have. And then as far as electrolytes replenishment I use The Right Stuff by NASA -- it's a new product, and it's amazing.

The UCAN works so well ... it's protein enriched -- the chocolate UCAN I take has 14 grams of protein, so that's like a meal. And then there's another flavor that's lemonade that doesn't have protein in it, and I rotate those -- two hours on, two hours off. And at night, I'll only have the protein kind, when it's not so hot.

You're running this, in part, to help raise awareness for RunningWorks, your non-profit founded to help the homeless. How did that start? And why the homeless?

The motivation behind it was that, even though I was working with the Challenged Athletes Foundation, I wasn't getting my own hands dirty. So I felt like I had the means and the ability, and the desire and the passion to do something myself.

At the Urban Ministry Center, I learned about the soccer program they had for the homeless, and I thought, "That is the coolest thing ever!" It's changing people's lives through sport -- and that whole idea lit me up. 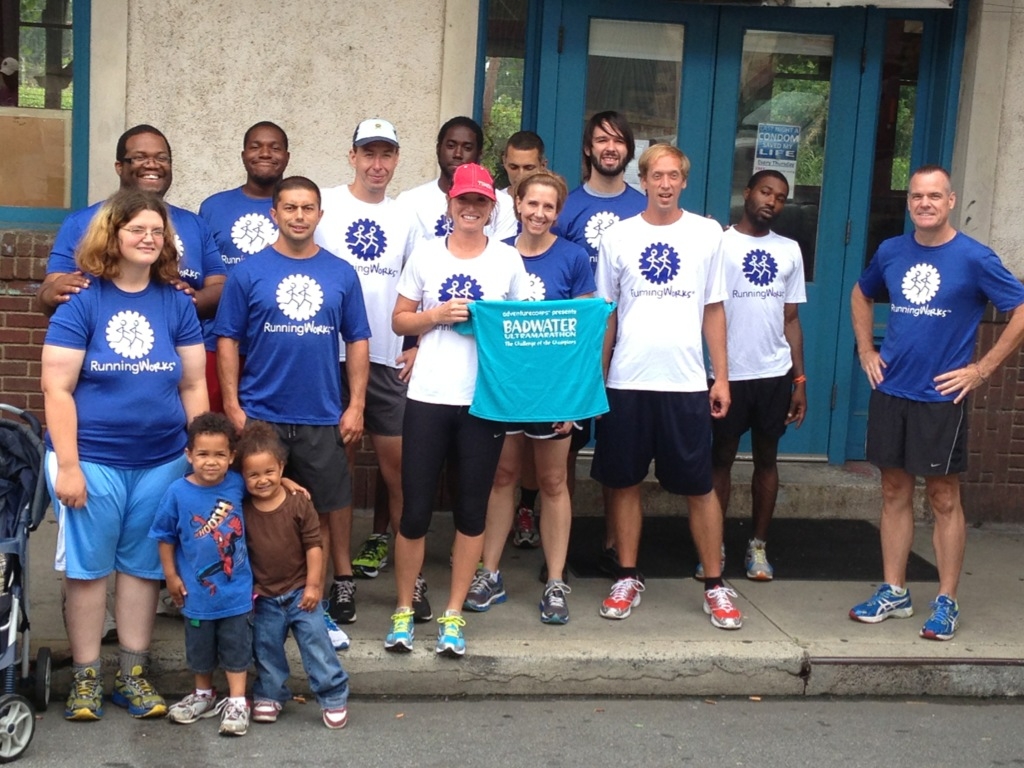 What's your motivation through all of this? What do you tell yourself when your brian is screaming at you to quit?

A lot of the times, I think about my homeless guys, or I think about the CAF. That's the God's honest truth. There are many times I think, "How can I possibly be feeling sorry for myself right now? Even my worst day racing is so much better than they have it."

I'm not going to feel sorry myself. I'm a tough sell when it comes to complaining -- look, let me show you about 10 people who have it worse.