On Sunday, Stride Nation had a chance to chat with Dathan Ritzenhein in the wake of a disappointing finish at the 2012 U.S. Olympic Marathon Trials in Houston. We say "disappointing" in the most qualified of senses since Ritzenhein finished with a personal best 2:09:55. Yet that was only good enough for a fourth-place finish and missing the cut for London by eight seconds.

The race marked a remarkable comeback for Ritzenhein who underwent sugery on his Achilles Tendon after the 2010 ING New York City Marathon and complications from that procedure sidelined him from racing for a full year. To augment his recovery and jump-start his training for the Olympic trials, Ritzenhein partnered with Gatorade and employed their Sports Science Institute (GSSI) to focus on the nutritional aspect of his performance. The good folks at Gatorade were kind enough to set us up with this interview.

Stride Nation: How are you handling the outcome of the race Saturday?

Dathan Ritzenhein: It’s just a tough time you know since it’s basically three really happy people and everyone else is a little disappointed. Fourth place is probably the worst place to be. I bounced back and my body feels great at least. I’ve had so many hiccups and injuries over the last year that I’m really just happy that I was able to come back and finish strong. Now I’ve got to really turn my focus to try and qualify for the Olympic Games on the track, hopefully in the 10K.

SN: How do you rebound mentally from a disappointment like that?

DR: It’s tough a lot of times when you do this for a living and it’s your identity you tend to lose sight of the triumphs like that. It was still a personal best but at the same time I learned more things about what I can change for the future and it gives me time to re-focus and I have that great strength background now going into the track which will really be beneficial when I really have to focus back in on some speed. I’ll have that real endurance base.

SN: Is there a lesson there for the amateur runner?

DR: That’s the beauty about running; it’s a universal experience from someone who is an elite runner to someone who is maybe doing their first marathon to someone just trying to get into running. You judge for yourself your successes and failures and there isn’t one without the other.

For me there has been a lot more failure than there has been success but that’s really what makes those really big moments important and special so you have to really take those bumps on the road and use them in a positive way. For me it’s been really easy to re-focus after something hard like that. There is always those initial moments of disappointment but you have to either quit or move on and that’s what I’m doing now. It’s kind of the good thing about running; anybody can have a bad result but still use that as motivation for the next time.

SN: It seems a great deal of the outcome also hinged on the quality of the competition this year.

DR: The state of American distance running has gotten so much better. Depth-wise we’re probably the best in the world with the exception of Ethiopia and Kenya. We’ve got guys that are able to run under 13 minutes for 5K and 27 minutes for 10K and in the marathon it’s the same thing. Those guys ran incredible yesterday. I didn’t have a bad race, they just had incredible races.

SN: That's a nice change for the sport, no?

DR: There were some dark times for American distance running in the 90s and early 2000s. In 2000 we only qualified one person for the [Olympic] marathon because we didn’t have people who could run fast enough. Now we are turning people away because so many can perform up to that standard.

It’s really great to have connection between people like Alberto [Salazar, Ritzenhein's current coach] and Frank Shorter and the time when they really dominated. Now it’s a different world. There is so much science involved. Nowadays you can’t just train hard. In the 80s they used to just train like crazy but now you have to have everything exactly right in order to compete on that specific day.

SN: You've struggled with injury issues quite a bit recently. Can you tell us a bit about that?

DR: I had a couple of surgeries on my Achilles and various other health problems related to the surgeries. So that’s why I can’t be too disappointed with fourth, either. I was off for six months when everyone else was out training. I wouldn’t have even though six months ago I would have been on the starting line this weekend. You gotta take that as it is as well.

Usually when I’m injured I’ll do a lot of cross training and things like that but I was really sidetracked because I had complications from surgery; a wound that wouldn’t close and subsequent infection. I couldn’t work out at all. It was a lot of time of just sitting on the couch not doing a whole lot.

SN: How long was your break from racing?

DR: It was 364 days. I finally did a 5K in November. That was the first race I’d run since the New York City Marathon last year.

SN: What role did the Gatorade Sports Science Institute play in your preparation for the trials?

DR: Their help was really been key for me because coming back from a long period of time off your body isn’t as ready as it has been in the past. When I did sign on with Gatorade this year that was really a focus for me because even in my marathons before that I had quite a bit of nutrition problems. I’ve tried every product on the line. It was pretty important to me to get into the GSSI which I did in October and we did metabolic testing to kind of key in and see exactly what my body needed specifically.

So my partnership with Gatorade has been valuable because even in this marathon, coming back from that long period of time off I was still able to have great training. I was recovering well every time out and I got my fluids dialed in which is a huge thing in professional marathoning. We get our own bottles to put whatever we want in at every 5K on the course so we really practiced that. That was part of the recovery since after such a long period of time off its easy for something else to pop up as well. 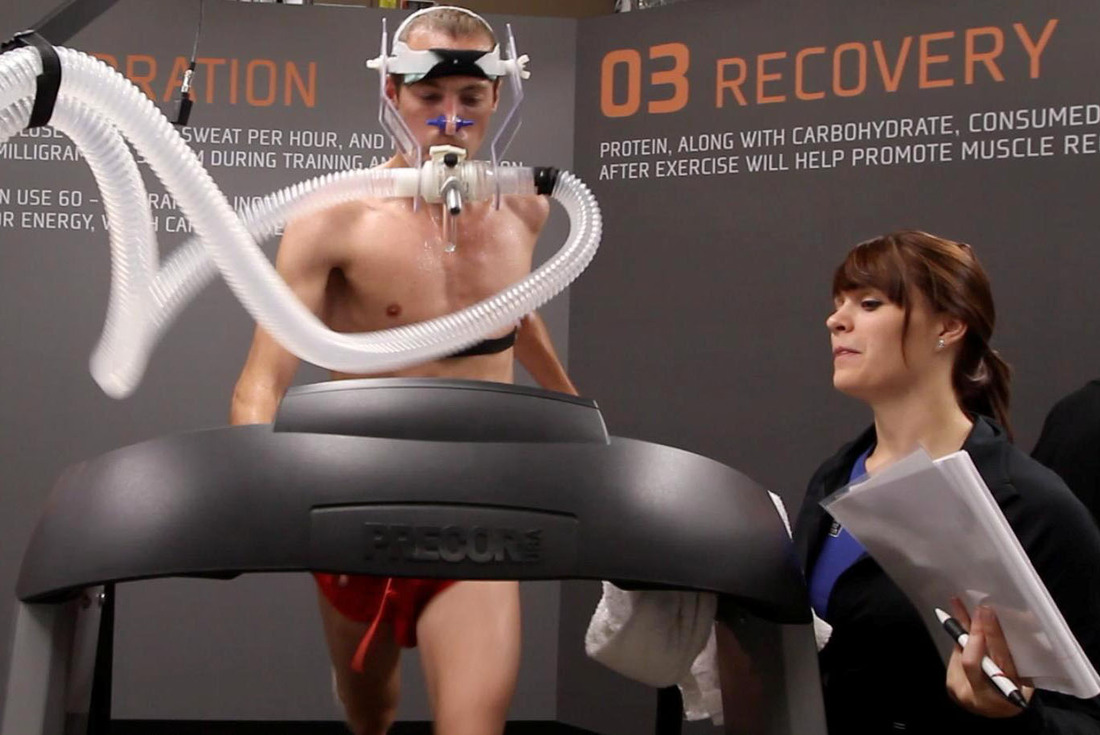 SN: Did you use GSSI to develop race-specific data or info for general training?

DR: We went through a whole array of testing. Some of the stuff maybe wasn’t sport-specific but a lot of it was looking at me specifically from a broad standpoint as well. There’s the high end we use in the race and we did dial that in. We did a lot of specific metabolic-type testing, sweat rate and things like that. We also looked at my daily nutrition, my body composition, all those things to try and make sure I was covering my bases at all times and not just during the race. It’s only 90 percent of the time that I’m training that hard. The rest of the time it’s just easy training and daily life which makes a huge difference.

SN: Why is this kind of data so important?

DR: In any sport the higher up you get in terms of competition, the smaller the margin of error and the more those little things add up to significant differences. In the marathon it’s compounded because there are so many factors at play. That’s what professional sports is all about, trying to find that edge and that’s what I’m doing here, trying to do everything within the rules that can help me deliver the best possible performance.

But that’s part of the reason that drew me to Gatorade, you have to really focus in on taking every advantage you can. I still had had that problem with the marathon, I wasn’t able to close that gap. It gave me a good start, particularly with six months off earlier in the year.

SN: How does that information help you going forward?

DR: In a race like yesterday… sometimes you question yourself a little bit. I thought I would perform a bit better in the marathon. But being there I did get some hard numbers to know there is a really good basic talent lying in there. It’s not that I’m not "made" to run the marathon. Maybe I won’t focus so much on it as I have been but the talent is there, I’ve just got to harness it and get everything right. It’s a matter of keep plugging away at it, the training, the nutrition, staying healthy… eventually it will come together.

SN: So what is next?

DR: The Olympic Track & Field trials are in June. So I gotta refocus on the 10,000 meters and make that team so I can still represent the country in London.

SN: Will it be difficult to switch from marathon training to focusing on that?

DR: They kind of overlap which is nice. The biggest difference for me in this marathon training effort was that I was never wiped out. I recovered very well every time and I do really attribute that to some of the nutritional work that I’ve done. Because sometimes the race doesn’t beat you up so much, it’s the training. I feel fresh. I feel ready to go. That helps me mentally in turning my focus and say "Let’s make the best out of this situation."

When I broke the American record in 2009 [a 12:56:27, 5,000 meters at the IAAF Golden League Meet] it was the same thing. I came off from training for a marathon [The 2009 Flora London Marathon], which is a little unorthodox, and I had that big aerobic foundation from doing those long miles as a base. Then I shifted and started doing a lot of fast speed work and the results happened pretty quick. That gives me a lot of confidence and mentally that helps me out.

SN: So do you intend to compete in marathons in the future?

DR: Yes, definitely. Yesterday my reaction was a little bit of "Maybe I’m not made for the marathon," but everybody says that after they do a marathon. There’s something that draws you back to it. The testing I did at GSSI shows the talent is there. So you get past the initial disappointment and you move on and I think I’ll be back at the marathon for sure. I’m going to take a lot of time focusing on the things I’m good at too – the track, half-marathons – I’ll use that in building up to marathons. Try to do both instead of focusing exclusively on the marathon.