Pheidippides: The Man Who Ran the First Marathon

Share All sharing options for: Pheidippides: The Man Who Ran the First Marathon

Even if you aren't a runner, the word carries a hefty amount of meaning. It suggests a difficult and arduous challenge that can only be overcome due to perseverance. It's also a place. A city in Greece where a famous battle occurred 2,500 years ago that was where the significance of all these things came from.

For runners, the Battle of Marathon is indelibly associated with Pheidippides. This Greek soldier/messenger is said to have rushed from the scene of the fighting back to the city of Athens to announce the victory over the Persians -- a distance of about 25 or so miles depending on which route you take.

But why was this news so critical that a man would run so far and so hard he would drop dead upon delivering it? What was there about this battle that mattered so much that it's entered into the collective consciousness to the extent it has?

To understand all of this you have to know a little of the context of the First Persian War which the Battle of Marathon concluded. The Persian Empire, under King Darius I, was the major global power of its era. Darius had usurped the throne and spent a good deal of his early reign quashing internal dissent. After that he began looking further afield.

The Greeks of that era were not yet the storied culture we associate with classical antiquity. The Athenians had come up with democracy about a century prior but were still dealing with tyrants popping up now and again. Still, they did find time to irritate the Persians by supporting a revolt by the Ionians -- a group of Greek-founded cities in Asia Minor under the rule of Darius.

After dealing with these uprisings, Darius decided invade Greece. This was partly payback but also a continuation of his efforts to amass more power on the European side of the Aegean Sea. And a good foreign war often works wonders for quelling domestic conflict. (And, for the record, the movie 300 was about the Battle of Thermopylae which took place during the second Persian invasion of Greece.)

So in 490 BC, the Persians put to sea and headed west. They worked their way around the coast, kicking Hellenic butt along the way, until they reached the bay in the region of Attica, ruled by Athens. The Persians came ashore and began assembling their massive army in the plain near the city of Marathon.

When the Persians landed, the Athenians immediately sent their army (bolstered by a smaller force from Plataea) to block the two main exits from the plain into the interior of the country. The result was a stalemate. While the 10,000 or so Greeks were outnumbered at least 2 to 1 (and many estimates put the number even higher), they had the advantage of the terrain.

Now, earlier, when the threat to Athens became clear, our man Pheidippides was sent to Sparta to ask them to lend a hand. Regrettably, the Spartans were in the middle of a religious festival and said they'd have to wait till it was over to help out. That meant the Athenians had to hold out ten days before they could expect reinforcements. Pheidippides turned around and ran back to Athens with the news.

So that was his first run. Sparta and Athens are about 150 miles apart, so Pheidippides would have put in a good 300 mile training run the week before his famous jaunt. 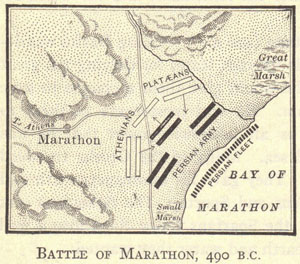 Hannibal would later use this same strategy
against the Romans at Cannae.

With the knowledge reinforcements would be coming the Greeks played for time. For five days they had a staredown with the Persians on the plain of Marathon, neither side making a move. Eventually, they had enough and went on the offensive.

While the reasons behind the Athenian decision to attack have been debated, the effect isn't. The better armored Greeks blasted into the Persian lines and then began to flank them on both sides.

As the Persians realized they were about to be encircled, they made a rush back towards their fleet. A large number ended up running into the nearby swamps where they perished. While the Greeks were able to destroy seven of the ships, the bulk of the Persian fleet was able to escape.

Given the Persian's military power, a lot of people in Athens thought the likelihood of their army besting the foreign invader was rather slim. So when the Persian fleet set sail from the Bay of Marathon there was a real danger they could reach Athens before word of the victory did. The city fathers might then surrender the city to the Persian navy thinking all hope was lost.

The Athenian generals began organizing the army to march back to Athens to defend the city and dispatched Pheidippides to tell the people there to hold on till they arrived. Now it should be noted that Pheidippides, who had already run 300 miles the week before, had just finished fighting in the battle itself.

According to Plutarch, Pheidippides then ran the entire distance back to Athens without stopping. Reaching it he burst into the assembly, exclaiming "Νενικήκαμεν" or "We have won." Whereupon he collapsed and died.

The Athenian army arrived in the city later that same day after marching in full gear the entire distance from the battlefield. The Persian ships showed up soon afterward, saw the city was fortified against them and turned away ending the Persian invasion of Greece. For the time being, anyway.

The victory was immensely important as it destroyed the perception of Persian invincibility and paved the way for Greece's later successes against the Eastern invader. It prompted the rise of the Hellenes as a military power and the allowed the emergence of Classical Greek civilization.

Now while the Battle of Marathon is a historical fact, there's a lot of debate of whether this particular event involving Pheidippides actually happened.

Plutarch, writing in the 1st century AD, says it did. He cites the account of Heraclides of Pontus but that work has been lost. In any case the name of the runner is different. A century later Lucian of Samosata recounts the tale but says the runner's name is Philippides. The Greek historian Herodotus added to the confusion by naming Pheidippides as the runner sent to Sparta but doesn't mention the run from the plain of Marathon to Athens.

Eventually, the English poet Robert Browning wrote his take of the tale in 1879 that was a composite of all of these. It became very popular and is now the version of the story most people recognize. And that account was on the minds of many when the race was conceived as part of the introduction of the modern Olympics in 1896.

But that's a different story ...