Some Thoughts On Winter Running Gear

Share All sharing options for: Some Thoughts On Winter Running Gear

Last week, Cory wrote about his struggles with adapting to cold weather. Rather than trying to write any sort of definitive guide, I thought I'd offer a look at the two sets of gear that I have for running in the winter weather and why I chose these items.

The caveats: Metabolically I'm almost always hot – I tend to layer far less than most of my coworkers, rarely wear a heavy coat, and run in shorts down to about 15 degrees. I grew up in Northern Ohio, where six inches of snow can fall overnight and life goes on as usual. I now live in DC. The winters that I deal with now are far more mild and snow falls about three times a year. My 'cold gear' is designed to work where I currently live (though my low-temp gear has handled a –15 wind chill in Ohio just fine). This list may not help out runners in Winnipeg, but it should work for most of the country.

Just like plenty of other situations in life, it's probably in your best interest to buy a minimal number of versatile well-made things. Look at the clearance rack at local shops, Dicks Sports, or REI (lots of winter gear is on sale right now, especially at REI). These are clothes that you're going to sweat profusely in, so don't worry about colors or small stains. Worry about fit and functionality – if you do decide to spend a lot of money on a heavy fleece be picky, as a well-made fleece will last you ten winters at a minimum. With that in mind, here are the items that I go to in cold weather (I've included links to similar items; the exact models likely aren't still available). 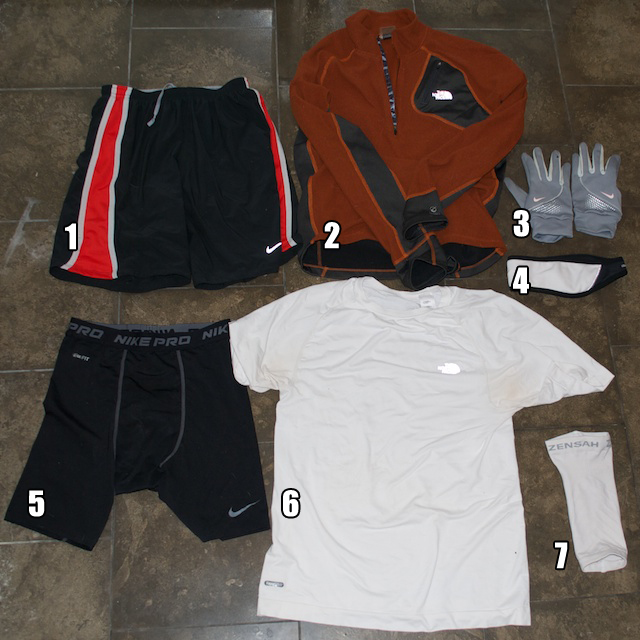 1) Inner-lined running shorts. Everybody has their preference on these, but I like the offerings from Nike. These are a year-round item, and I just throw these on over my compression shorts for modesty's sake.

2) A light-weight fleece. This fleece is from The North Face's Flight Collection. There's no wind-stopping fabric to this, just some sweat-wicking under-arm and on the lower back. It's got a small reflecting logo on the front and is 1/2 zip. Having a 1/2 or even 3/4 zip in winter running clothes is an excellent feature: by being able to open and close the fleece and breathe, temperature can be regulated easily and on-the-fly. This jacket also has a chest pocket to store ID and Metro card, in case I get hit by a bus or have to cut my run short. There are few things worse than being stranded in the cold.

3) Lightweight nike running gloves. The fleece actually has thumb-holes at the end of its sleeves, but a pair of gloves works well for slightly lower temps.

6) Sweat-wicking under layer. The same sweat-wicking shirts that I wear in the summertime get put on underneath my fleece. Having wicking in the cold is as important as in the heat, as they allow sweat to evaporate and get out easily. This leaves you comfortably warm rather than wet and gross.

7) Calf compression sleeve. This is less for heat and more for recovery, though it might keep my calf a touch warmer. 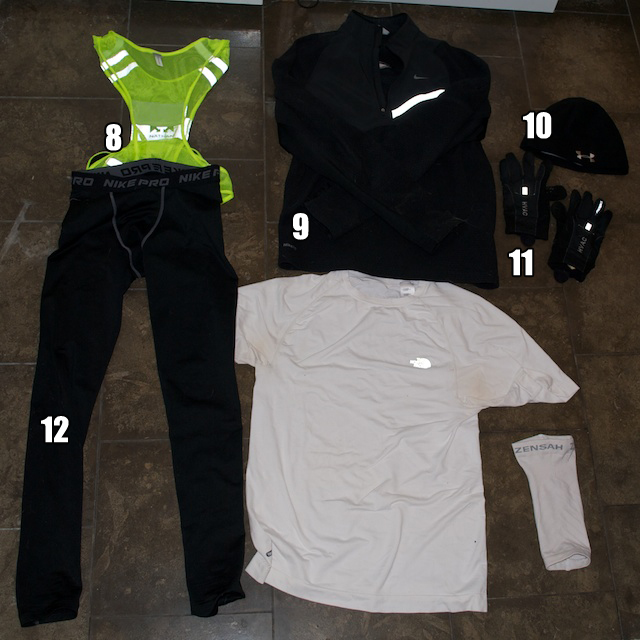 8) Reflective Vest. My cold gear is all black. That works out great in terms of absorbing heat from the sun, but it also makes me pretty much invisible in the dark. If I'm running early in the morning or at night (almost always early in the morning), I'll throw on the vest. It looks dorky, but it's probably better to look dorky than to get run over by a car.

9) Heavyweight fleece. This fleece is 1/2 zip and has a ripstop upper half to block the wind and snow. It's also got a sleeve pocket to hold an mp3 player and a chest pocket for ID. I got this at the Marine Corps Marathon race expo a few years back for about $45 and it's one of the best investments I've ever made in terms of running clothing. It's a Nike ThermaFit of some sort. My wife's only input for this article is that she has a Pearl Izumi fleece jacket for cold weather and loves it.

11) Heavy gloves. These are without question my favorite item that I have for cold-weather running. They're the Brooks HVAC model, with a flip-back thumb for controlling an iPod, a backhand pocket to store a house key, and some reflective tape on them. Best of all they have two sets of magnets in them which keep the gloves together when you're not wearing them (this is particularly handy after a few hours of running, when you don't need the gloves anymore).

12) Long tights. My long tights are a standard Nike microfleece pair, and they work well enough. I know many people who swear by CW-X tights; I haven't ever tried those out to have any advice on them either way.

Again, a sweat-wicking undershirt is a must, and the calf sleeve gets bumped to after-wear to recover in.

Shoes for the snow/ice: 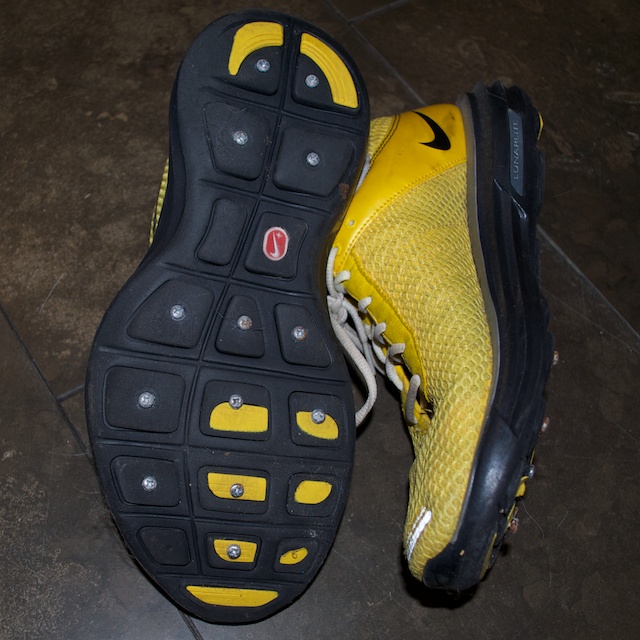 I don't live in an area that snows much, so I have zero experience with things like crampons and the like. A few years ago, we had a big ice storm and I modified an old pair of trainers with 1/8" screws to allow me to run on the ice. They worked out surprisingly well – when there was ice to run on. When running on asphalt it was like wearing a pair of metal-tipped cleats with the added benefit of poking through into my feet a little bit.

This probably isn't the smartest way to modify your shoes to run on the ice. It kind of works, but unless there's consistent ice coverage. In fluffy snow, they don't work at all.

This is the gear that I've accumulated over a few years – I have a number of other fleeces and tights laying around, but these are the ones that I keep turning back to over time.

What gear do you guys turn to in the cold, if you have to deal with it? (I hope your answer isn't the treadmill, but I won't hold it against you).