The Marathon - More Popular Than Ever

Share All sharing options for: The Marathon - More Popular Than Ever

It used to be said that to finish a marathon made you one in a thousand. Turns out it's actually a little lower than that now. For every 607 Americans, one person finished a US marathon in 2011.

The 26.2 mile race continues to enjoy growing popularity with approximately 518,000 people finishing more than 720 marathons held in the United States last year, according to Running USA's annual report. In the past 12 years, there has been a 47% increase in the number of marathon finishers in races held in the United States. This graph, using stats compiled by Running USA and Marathon Guide, shows how that popularity has increased year-to-year since 2000. 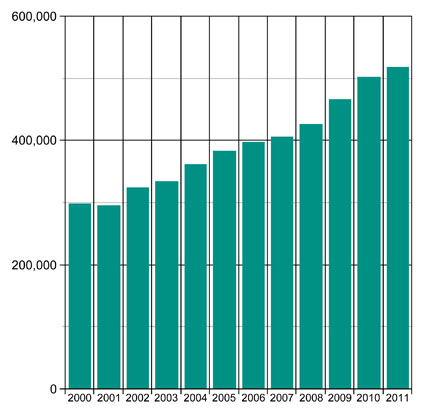 The trend can be seen in the participation in the premier marathons over the past decade. Last year the New York City Marathon saw more than 47,000 people cross the finish line making it the largest such race ever held. For the most part, all the major races have seen progressive annual growth over the past decade with the exception of Honolulu. These figures are also compiled from Running USA and Marathon Guide numbers. 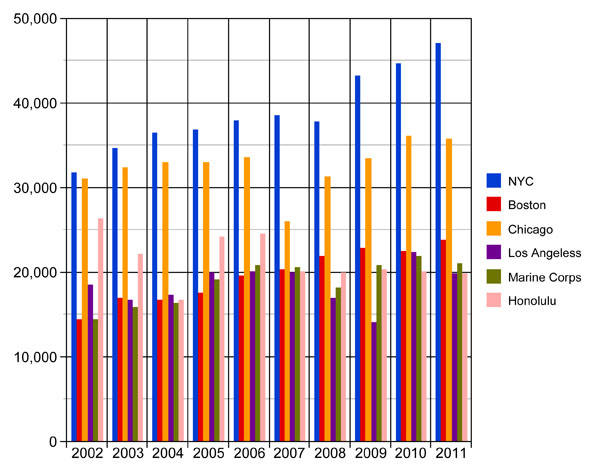 Entrant caps on big-city races and a growing interest in half-marathon events has tempered the runaway growth of destination marathons seen a few years ago but those are only the tip of the iceberg, so to speak.

And the overall number of marathons has grown tremendously. In 2000 there were only an estimated 300 26.2 mile races; last year there were more than 720.

As you might expect, all this is translating to more people running more training miles. Running USA's survey of 11,800 runners found that US marathoners ran approximately 4.4 days per week for an average of 29.4 miles. They also purchased approximately 4 pairs of running shoes and 83% had spent $100 or more on running apparel in the last 12 months.