Skechers Shape-ups, "ideal for walking and low or high impact fitness activities," are pretty goofy-looking sneakers. See what I mean? 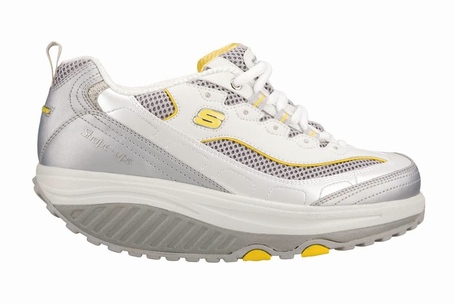 But what they lacked in aesthetic value, they made-up for with health and fitness benefits. Skechers said the shoes can, among other claims, "increase lower leg muscle activation" and "calorie burn." Problem was, Skechers was being sketchy. And now they have to pay.

Skechers has to pay a $40 million settlement after the FTC brought forth charges that the health benefits simply weren't there and the company was misleading consumers with "unfounded claims that Shape-ups would help people lose weight, and strengthen and tone their buttocks, legs and abdominal muscles."

The settlement includes Skechers' Resistance Runner, Toners and Tone-ups. Additionally, customers who bought the shoes will be eligible for refunds, "either directly from the FTC or through a court-approved class action lawsuit."

The FTC said the study results Gautreau promoted weren't factual, and alleged the company hid the fact that Gautreau is married to a Skechers marketing executive. The FTC also said Gautreau was compensated for his endorsement, which wasn't made clear in the commercial.

Per the terms of the settlement, Skechers is no longer allowed to make claims the shoes have health benefits until backed by actual scientific evidence.

There was seemingly no mention of the GOrun shoe, which is worn by American Meb Keflezighi, a Skechers-sponsored marathon runner.