On Oregon's Odd Uniforms and the Legacy of Bill Bowerman

Share All sharing options for: On Oregon's Odd Uniforms and the Legacy of Bill Bowerman

If you tuned into the 2012 Rose Bowl on Jan. 2 that pitted the Oregon Ducks against the Wisconsin Badgers, you would have been presented with an unusual sight - one team in helmets so shiny they seemed almost as if they were aglow. SB Nation college football maven Spencer Hall likened the UO lids to those of French electronic-rock duo Daft Punk and the analogy wasn't that far off.

The HydraChrome helmets, which reportedly cost $800 apiece, were developed by Nike, Hydro Graphics Inc., and Riddell. The eye-catching headgear swallowed up a huge amount of interest leading up to the game and not a little bit after Oregon's 45-38 victory in Pasadena as well.

So what, you may ask, does this have to do with running? Quite a lot, actually.

Over the past decade or so, Nike hasn't been shy about tinkering with the football uniforms of the Oregon team and the usual response to these efforts is amused scorn. From a marketing perspective, the advantage is obvious. The hometown Ducks get first dibs on the gear Nike will later be foisting on the rest of the field in what has become a staple of the pre-season, the Pro-Combat uniform unveiling.

Yet despite the formidable amount of snark these efforts tend to launch in the direction Eugene and Beaverton, its important to understand they are also firmly part of the legacy imbued by Oregon's greatest track coach, Bill Bowerman. An inverate tinkerer, Bowerman was obsessed in finding every technological edge to gain an advantage for his athletes within the constraints of the rules. That approach not only allowed Nike to become the success it is recognized as today, through the company's subsequent influence it also transformed the sport of running for both for the elite athlete and the regular runner.

The ties between Nike and Oregon are famously strong and are exemplified by the president of the athletics industry Goliath, Phil Knight. Not only is Knight an alumnus of Oregon, but also a middle-distance runner on the track team where he was coached by the legendary Bowerman. Yet the connection goes much deeper than simply an affection for one's Alma Mater, it's one of basic axiomatic principals that were the hallmark of the Oregon coach's philosophy.

During Bowerman's 24 years as the Duck's coach, the "Track Men of Oregon" simply dominated the sport. Between 1948 and 1972 the Ducks racked up four NCAA team crowns and 16 top-10 NCAA finishes and went undefeated in 10 seasons. The squad also claimed 24 NCAA individual titles and 33 Olympians.

Bowerman's success was founded on finding the best talent and giving it the opportunity to grow. While he certainly had the ability to inspire, his style wasn't one of a master motivator. He never gave pep talks. Instead, Bowerman was meticulous in searching for ways to help his runners maximize their vast potential, according to biographer Kenny Moore who was a runner on the Oregon team under the coach.

"He examined and reexamined what we ate. What we wore. What we did (and whom we did it). He rethought our gifts, our goals, and the blind spots that kept us from reaching them. He took a personal interest not only in our roommates but also in our classes, our jobs, our diet, even our women."

This lead him to some unorthodox approaches such as insisting on restraint and rest rather than harder and more intense efforts. The efficaciousness of the approach is clear in the team's record of success.

What Bowerman realized was that at the highest level of competition the margin of difference between athletes was agonizingly thin. Any advantage a coach could find that was within the rules would give his runners an edge that could very often be the difference between victory and just placing. 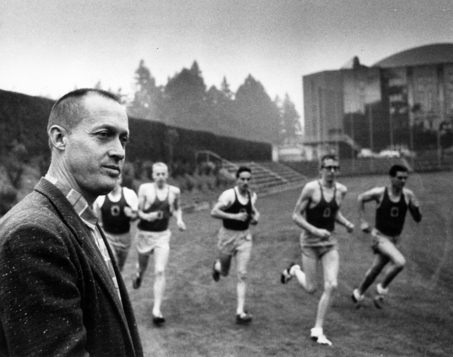 While that gap was surmountable in training, there was a gulf waiting to be taken advantage of in terms of equipment and Bowerman set out to be the first to overcome it.

Originally, the Oregon track uniforms were composed of yellow shorts and green stinglets. That changed in 1961 due to the addition of a short-distance runner named Harry Jerome to the Ducks track squad. Bowerman knew the talented Jerome would face the formidably fast Bob Hayes from Florida A&M in competition and wanted to give his runner an advantage if a close race developed.

He switched the coloring scheme of track team's uniforms and altered the hues significantly. The shorts were a vivid green and the jerseys the brightest shade of yellow the coach could find.

"By God, if Harry gets a half an inch of his chest ahead of Bob Hayes I want those judges to see it," Bowerman insisted.

On another occasion, Bowerman noticed his runners returning from training runs on wet, chilly mornings with soaked sweatpants. In an era before nylon running tights, his solution was to issue the team cotton long underwear that kept their legs freer for movement as well as warmer.

Almost immediately the athletic department was deluged with phone calls from shocked local residents upset over the "indecent" attire. So he dyed them all dark green which mollified the populace and left the runner's legs "splotchy green" after workouts for awhile.

No area of his domain was exempt from such tinkering. He experimented with various types of track surfaces looking for one that gave the best traction for runners but also giving enough for the demands of constant training. He created a lightweight practice hurdles and concocted crude (and reportedly rather unpleasant to consume) energy drinks long before Gatorade appeared on the scene.

Yet, perhaps, Bowerman's most intensive (and important) experimentation was with shoes. The Oregon coach was constantly looking for new models that his runners could wear and building his own when they invariably wouldn't measure up to his standards.

The goal that Bowerman sought was to build a shoe as light as possible but still provided the necessary support a runner required to remain healthy.

Bowerman once summoned a runner to his office who had developed an injury and instructed him "You will lay before me the shoes that you wore." He then dissected the offending footwear on his desk to discern the problem.

Nike began as a handshake agreement between Bowerman and Knight in 1964 under the aegis of Blue Ribbon Sports. Initially the company sold a brand of well-made Japanese running shoes in the United States but soon they were producing footwear of Bowerman's own design.

The result was the creation of the "Cortez" running shoe two years later. The idea was to mass produce a custom style shoe specifically for track runners. With the quality of the design it didn't take long for runners to recognize how it would help their performance. The Cortez became a top-seller and re-defined the way athletic footwear was made and sold. 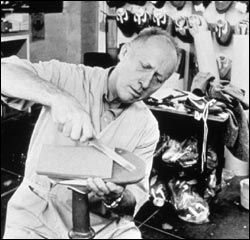 Bowerman continued to experiment with shoe design including a famous incident where he destroyed his wife's waffle iron to create the sole of a prototype shoe. His theory was that a sole with greater surface area would grip the running surface better. The result was another Blue Ribbon Sports hit, The Moon Trainer.

In 1975, Bowerman sold his ownership stake in what had then become Nike to Knight but stayed on as a consultant focused on the development of new shoe designs. His involvement with the company lead to the creation of Nike's research and development department which became a standard for the industry.

Bowerman eventually paid a heavy price for his devotion to improving athletes' footwear. One of the glues he used to construct his shoes contained hexane, and the exposure to the fumes permanently damaged his neurological system. Later in his life he suffered a limp that forced him to wear a leg brace.

The runaway success of Nike in the late 1970s and early 1980s lead to Bowerman's principles becoming the standard of the running shoe industry. As the company expanded into other areas of athletic sportswear, the competition was forced to match it's innovative apporach or face the financial consequences.

That trend, in turn, brought Bowerman's philosophy into the mainstream. Today the idea of using science and technology to gain an edge on the competition is now such an integral part of sports we almost take it for granted. The importance examining and understanding performance and the willingness to use that information to challenge conventional assumptions about what works is Bowerman's true legacy to running and all of sports.

So, you ask, what was the deal with those Rose Bowl helmets? Well, the actual theory behind any kind of edge these may have provided for the Ducks hasn't been propounded on by anyone involved in either their design or the team's gameplan.

Yet, watching the game it's not difficult to discern that the all-green uniforms make it very hard to distinguish where, exactly, the Oregon players are on the field. That might be an advantage for the offense trying to disguise which player is the one carrying the ball but it also makes it difficult for the quarterback to see his receivers down the field.

But the human eye is drawn to motion and brightness, both of which the receivers would have in spades wearing the HydroChrome lids. Those shouldn't pose much of a challenge to spot for a quarterback expecting his pass targets at specific positions on the field. And for a team looking for an edge against a powerful opponent that might just have proven enough to find the seven-points that gave them the victory.