We recently talked with ASICS' athlete Ryan Hall, elite runner and the fastest American marathoner. We asked him to share advice and tips for running New York, how to recover after a great race, and what helps get him through his "dark moments."

Share All sharing options for: Ryan Hall interview: On NYC Marathon, training and tips for recovery

On how to best deal with this year's stress of getting to New York City, and the possibility of altered routes or training after Sandy ...

Think about everything that is happening to an advantage. For myself, when something random has come up -- hot conditions, or cold conditions, transportation delays -- anything like that I use to my advantage, saying, "I'm not going to allow myself to get psyched out" ... Trying to interput everything as positive. And there's going to be a ton of talk about it ... it's like the weather, they tend to blow it way out of proportion. Stay out of all the hype.

Ryan Hall pulled out of the marathon in the 2012 Summer Olympics around mile 11 with hamstring tightness. The injury issues continued during training for New York, forcing him to withdraw from this year's Marathon ...

I decided [to skip the 2012 NYC Marathon] a long time ago now, a couple weeks after the [2012 Summer Olympics] actually. Came back, took a break after the Games, and then started training, and in the first 10 days I tore my quad, and it was a pretty bad tear. I got an MRI on it and it showed that I had a tear in my quad. And after consulting with various doctors they were all saying the same thing -- "It's going to be a number of weeks until you're able to run again." So I knew missing those two weeks, and with the short turnaround to New York, there was just no way I was going to be able to make it happen. So I decided to shut it down and start training toward the Spring. 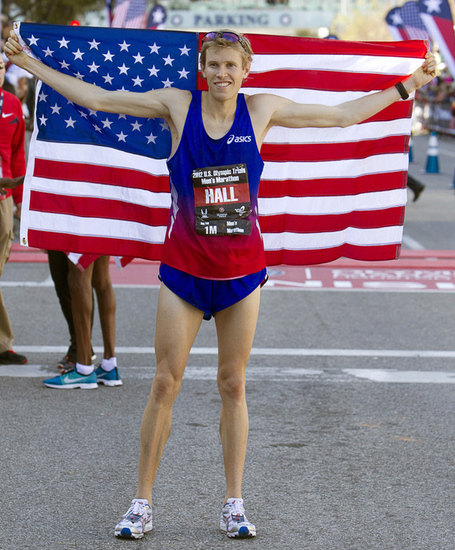 On his recovery, and how training is going as he prepares for 2013 ...

Recovery is going really well. I worked really hard to get totally healthy, everything from acupuncture to ultrasound to massage to ART [active release technique], everything you can imagine to work on getting that thing totally healthy. And it's doing really good now -- I'm running, actually quite a bit now that I've gotten back into the swing of training. Now it's just tough, because you take so much time off to recover, and work so hard to get healthy, and then you have to start working on the fitness end of things, which can be almost more frustrating. You're just remembering how certain paces typically feel and right now those same paces are showing quite difficult. But it's a good problem to have.

After seeing his tweet about doing box jumps for the first time "in years," I asked Hall to share some of the specific strategies of his training ...

It's all part of the training. I need to, I call it "turning my legs on." Working on the nervous system side of things, where I'm getting my legs firing. And I need to do some of that training that I typically hate to do.

I would rather go out and do 15 miles ... So I need to do some of those things I'm not good at, specifically to turn my legs on and get those power, fast-twitch muscles firing. Another thing I'm doing is some biking -- a couple afternoons a week, where I'm just turning it over super quick on a bike. Because it's hard to do when you're running, but on a bike you can turn it over like 120 RPM. I've been doing marathon training for quite a bit, so I'm learning how to turn my legs on.

Cycling? Could a triathlon be in Hall's future? 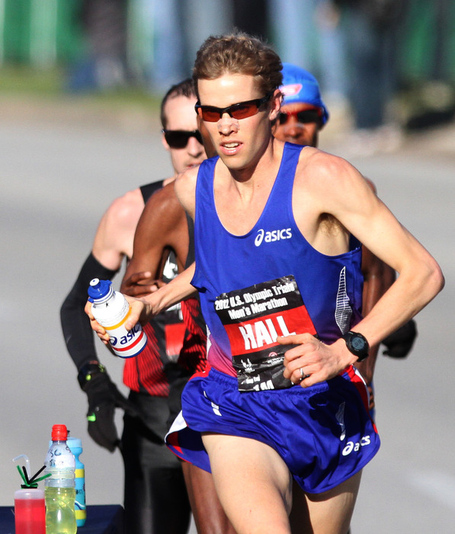 After dealing with multiple injuries in 2012, does Hall feel like he has something to prove in 2013?

I never run to try and prove anything. I just run because I love it. And it's fun, and God's given me a gift to do it. But there is that sense of wanting to get back out there and have a really good race, but not necessarily with the motive of trying to prove myself. I've been proving myself ... going 2:04, 2:06, two Olympics teams. Obviously there are some things I'd love to accomplish, like winning major marathons, things like that, but I just love to run. I'm passionate about getting to the next level. I'm hungry to run faster than I have.

What is his personal strategy for recovery, and what does he recommend to runners after the NYC Marathon ...

My recovery changes from time to time, and I'm still learning. One of the biggest things I've learned though is there's a difference between when your muscles recover and when your hormonal state recovers. After, say, four or five days, I'm not sore anymore. My body actually feels quite good because I haven't been running at all. And I feel like I can go out and run, and I can go out and run. But my hormonal state hasn't totally recovered yet, and that's what takes longer to recover. So I always encourage people, ya know, you're gonna feel like going for a run after four or five days, but wait an additional couple of days ... I usually take at least two weeks off, sometimes longer -- I've taken as much as a month off before.

It all depends on how hard you prepared for the race, how taxing the race actually was, but I guess my big warning is for people who have had a really, really good race, because I know for myself, when I come off my best marathons, the tendency is always to jump right back into it really quickly and not take that full recovery cause you're all fired up because you've had your best race ever and your body feels really good because you're in the best shape of your life and you just want to keep that momentum going -- so specifically for those people who have their best marathon ever, just be cautious. And err on the side of resting too much.

Advice on running the NYC Marathon, and what to expect from the course ...

One of the biggest things is not to be frustrated if your mile splits are a little bit slower than you're used to. When I was training for New York, I got myself in what I thought was the best shape of my life -- I was running really hilly, tough courses at 7,000 feet -- I was really, really prepared for the race. And I just remember having to fight off the frustration, looking down at my watch, mile after mile, and thinking, "Man why aren't my mile splits as quick as they feel like? I should be going way faster."

The NYC Marathon is deceptively hard, so just expect that, if your miles are 10 seconds slower than it feels like, just don't freak out about it. It's gonna feel harder than it actually is.

On getting through those "dark moments" ...

One of the biggest things I like to think about is all the people that I love, and that have support me on the journey. Ya know, we're all out there running the race, but there's always 10, 20 people who have been behind us the whole way. Whether it's supporting us with a massage or making us meals back at home or talking us through those tough moments in training, getting us up out of bed in the morning.

I like to think about my wife, when things get really tough, and just how much I love her, and and how much I want to see her at the finish line. That definitely gets me going a little bit.

Think about people that you love ... I find that I preform better off of love than aggression.