Should the New York City Marathon be run?

The decision to hold the NYC Marathon after Sandy has sparked a lot of criticism, and raised a lot of questions, none bigger than the central issue to all this: should the race even be held this year?

Share All sharing options for: Should the New York City Marathon be run?

UPDATE: The Marathon has been canceled.

The decision to run the 2012 New York City Marathon has sparked a lot of outrage. Is it okay to hold a race in a city that is still recovering from a major storm? Should the start be held on Staten Island, an area particularly ravaged by Sandy, where many are still without power and bodies are still being discovered?

New York Road Runners has promised that they would not take away from relief efforts, using private contractors when possible. But then the front page of today's New York Post shows two huge generators (not to mention an unused, back-up generator) being used for the marathon's media tent -- "The three diesel-powered generators crank out 800 kilowatts - enough to power 400 homes in ravaged areas like Staten Island, the Rockaways and downtown Manhattan." 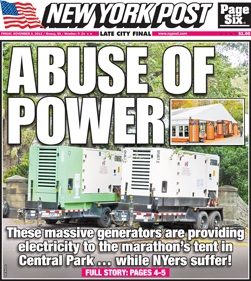 Is it as simple as hooking up the generators to 400 homes, though? Is getting the generators to Staten Island actually feasible, or even possible? Either way, it doesn't look good for the NYC Marathon, or NYRR. But NYRR is just doing their job, which is to put on the best race they can. It was ultimately Mayor Michael Bloomberg's decision to go forward with the marathon.

And that decision to hold the race has divided a city.

This is just what a city reeling from a once-in-a-lifetime storm doesn't need: a massive road race crossing through five boroughs that usually attracts 47,000 runners and 2 million spectators and requires 8,000 volunteers, 1,000 staff members and hundreds of police and other city workers and services. It's a terrible distraction coming at the worst time for the city and the region.

Whatever Bloomberg's reason to move forward -- to show the world that New York is bouncing back from Hurricane Sandy, to boost the spirits of those suffering, to not lose the millions of dollars the race generates for the city and its businesses -- it's the wrong reason.

Are We Really Going To Run This Race? - Jason Gay, WSJ

Still, it is difficult to look out at this city right now and see how 26.2 miles Sunday makes a tremendous amount of sense. New York remains a mess. The city is slowly mending, but downtown is stuck in darkness, and too much public transit remains shut. There is true devastation in some New York neighborhoods, and the nearby New Jersey coastline is a shocking disaster. Every day seems to bring a new heartache: On Thursday, the bodies of two missing boys, lost in the storm, were found in a Staten Island marsh. Though downtown power and subway service are expected to come back within days, a recovery feels weeks away, if not much longer. Con Edison announced Thursday that most customers can expect their power back by the weekend of Nov. 10. That's not this weekend. That's the next one.

"We wanted to do New York because it's the biggest and the best," Stephens said. "We were here, and we can see the storm was very, very serious. At the same time, people spend a lot of money at the local businesses here, and New Yorkers have a can-do attitude."

Mary Wittenberg, chief executive of New York Road Runners, the marathon organizer, made her way to the entrance and greeted employees and volunteers working at the event.

"This isn't about running," she said. "This is about helping the city."

She added: "We're dedicating this race to the lives that were lost and helping the city recover. We want to raise money and awareness."

Should the Race Be Run? - Lynn Zinser, New York Times

On one hand, it is unconscionable to stage an event in relatively lightly damaged Brooklyn that would involve 20,000 or so people, if you include all the employees, traffic cops and ticket scalpers who would have gravitated to the event, but perfectly O.K. to stage something with 40,000 runners and millions of spectators, which uses untold amount of city resources over a 26.2-mile course that ends in Central Park, which has not been accessible yet because no one knows how many trees are ready to fall on how many heads?

New York is a city that has a proven history of encountering tragedy only to unite and overcome it, even under the gravest of situations. I have no doubt that the city will do so again during these trying times, but staging a marathon this weekend -- even the biggest and most recognizable one in the world -- while the city it winds through is in the direst of straits shouldn't be a priority, and it does very little to improve the current situation for many of the 8 million-plus people who call the Big Apple home. I'm ready to be ripped apart for what I'm about to write, but the New York City Marathon does not need to happen this Sunday. There are more pressing issues that rightfully deserve the city's attention, energy and limited resources.

"To cancel is a loser for everyone," Chris Bergertron said in a comment.

"And even those most affected by storm fallout recognize, if they have any stake in the city's future beyond seeking attention for current inconveniences, the marathon brings in money and hope."

So what say you? Should the race have been canceled? Can the marathon be used to help brighten spirits, and perhaps provide a distraction, even if only for a few hours? Are you running? Or were you set to run but opted to defer to 2013? Share your thoughts, opinions and anger in the comments.